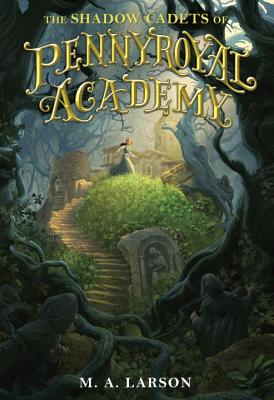 This is book number 2 in the Pennyroyal Academy series.

Perfect for fans of The School for Good and Evil comes the eagerly anticipated follow-up to M. A. Larson's Pennyroyal Academy, hailed by the New York Times as a "breathtakingly exciting novel" with a heroine who "deserves a special place in a new pantheon of capable, feisty and, yes, admirable literary princesses."

A triumphant victory over the witches has proven that Princess Cadet Evie really does belong at Pennyroyal Academy. News of her heroism has traveled far and wide—inspiring a kingdom of grateful citizens and, when the new term starts, a wave of fresh Academy recruits.

While it’s good to be returning to the Academy as a second-class Cadet, things are not as they should be. Evie witnesses the vicious attack of an innocent woman—by a trio of princesses. Pennyroyal’s Headmistress General, Princess Beatrice, is dubious about what Evie saw—princesses are enforcers of truth and justice, not thugs. But Evie isn’t so sure. Then, amidst piles of fan mail, she finds a letter with an ominous threat. A secret society has come out of the shadows with a wicked plan, putting the Academy in peril. It’s up to Evie and her friends to unravel the devious plot and save Pennyroyal Academy.

This sequel to the beloved, critically acclaimed Pennyroyal Academy promises middle-grade readers a tale full of adventure and suspense.

M. A. Larson is a film and television writer who lives with his wife, daughters, and two dogs in a canyon in California. Larson has written for Cartoon Network, Disney Channel, Disney XD, Disney UK, Discovery Kids Channel, The Hub, and Nickelodeon. As a writer on the cult sensation My Little Pony: Friendship Is Magic, he has been a guest at "brony" fan conventions from Paris, France, to Dallas, Texas.

Praise for Pennyroyal Academy
"M. A. Larson has created a magical world of adventure—a world that shows who princesses truly are: people of character and courage and strength. No one rescues Pennyroyal princesses; they rescue themselves."—Reese Witherspoon

"Pennyroyal Academy is one of those books you want to parse out and make last. It is a breathtakingly exciting novel, and Evie deserves a special place in a new pantheon of capable, feisty, and yes, admirable literary princesses."—The New York Times Book Review

"Flashes of inspiration light up a protagonist with plenty of spine . . . A sequel-worthy debut."—Kirkus Reviews

"Forget the notion of traditional princesses . . . Larson has crafted a dark Grimm-like fairy tale, with teens training to defeat evil, save villages, and find their own identities in the process . . . Larson has left the door open for a welcome second year at Pennyroyal with Evie and her friends."—Booklist

"[Larson] playfully nods to classic fairy tales . . . but he also imbues the fantasy with an important, affirming message for readers: 'You get to decide what you want to be. No one else.'"—Publishers Weekly

"A perfect fit for fans of Hale's Princess Academy and the novels of Gail Carson Levine."—BCCB