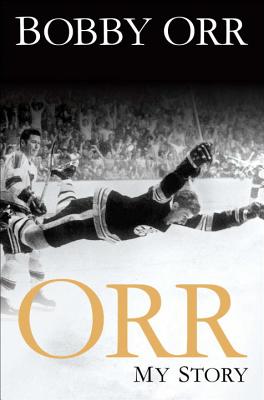 One of the greatest sports figures of all time breaks his silence in a memoir as unique as the man himself.
He has never written a memoir, authorized a biography, or talked to journalists about his past, but now he is finally ready to tell his story.
Bobby Orr is often referred to as the greatest ever to play the game of hockey. From 1966 through the mid-seventies, he could change a game just by stepping on the ice. No defenseman had ever played the way he did, or received so many trophies, or set so many records, several of which still stand today.
But all the brilliant achievements leave unsaid as much as they reveal. They don t tell what inspired Orr, what drove him, what it was like for a shy small-town kid to suddenly land in the full glare of the media. They don t tell what it was like when the agent he regarded as a brother betrayed him and left him in financial ruin. They don t tell what he thinks of the game of hockey today.
He is speaking out now because I am a parent and a grandparent and I believe that I have lessons worth passing on. "Orr: My Story" is more than a book about hockey it is about the making of a man.

Bobby Orr, born in Parry Sound, Ontario, in 1948, played for the Boston Bruins from 1966 through 1976, and helped lead the Bruins to the Stanley Cup championship in 1970 and 1972, and to the finals in 1974. He also played two years for the Chicago Blackhawks. He is widely regarded as one of the greatest hockey players maybe the greatest hockey player of all time. His speed and scoring and playmaking abilities revolutionized the position of defenseman. As of this date, he remains the only defenseman to have won the Art Ross Trophy league scoring title twice and still holds the record for most points and assists at that position. Orr won a record eight consecutive Norris Trophies as the NHL s best defenseman and three consecutive Hart Trophies as the league s MVP, as well as two Conn Smythe Trophies as the Stanley Cup MVP. He is the only player in history to have won the Ross, Norris, Hart, and Conn Smythe Trophies in a single season. He was inducted in the Hockey Hall of Fame at the age of 31 the youngest living player to receive that honor. After his retirement in 1978, Orr was active with business and charitable works, and in 1996, Orr entered the player agent business, and today is president of the Orr Hockey Group agency. He has been invested with the Order of Canada and the Queen Elizabeth II Diamond Jubilee Medal, and in 2010 was one of eight athletes who bore the Olympic flag out during the opening ceremonies of the Vancouver Olympics. The Bobby Orr Hall of Fame is in Parry Sound, Ontario."

Praise for ORR: MY STORY

“A must-read for anyone who fondly remembers the glory years of the Big Bad Bruins . . . Read ORR. It’s like reminiscing with an old friend.”—The Sun Chronicle

“I’ve seen all the greats since the 1920s, and I’ve never seen a player with the skills of Orr.”—Clarence Campbell, former NHL president

“I never knew a single player who could lift a team as Orr could.” —Stan Mikita, Chicago Blackhawks