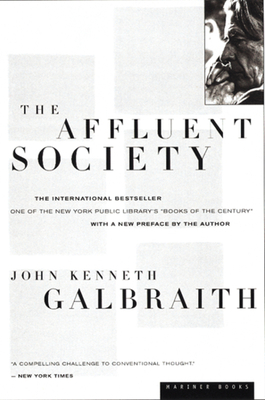 By John Kenneth Galbraith
$15.99
Unavailable at this time.

With customary clarity, eloquence, and humor, Harvard economist John Kenneth Galbraith gets at the heart of what economic security means in The Affluent Society.

Warning against individual and societal complacence about economic inequity, he offers an economic model for investing in public wealth that challenges “conventional wisdom” (a phrase he coined that has since entered our vernacular) about the long-term value of a production-based economy and the true nature of poverty. Both politically divisive and remarkably prescient, The Affluent Society is as relevant today on the question of wealth in America as it was in 1958.

John Kenneth Galbraith (1908-2006) was a critically acclaimed author and one of America's foremost economists. His most famous works include The Affluent Society, The Good Society, and The Great Crash. Galbraith was the recipient of the Order of Canada and the Robert F. Kennedy Book Award for Lifetime Achievement, and he was twice awarded the Presidential Medal of Freedom.

"One of the most gifted writers alive . . . tumbling the tribal Gods of both left and right." Boston Globe

"With his customary clarity, eloquence, and humor, Galbraith cuts to the heart of what economic security means (and doesn't mean) in today's world and lays bare the hazards of complacency about economic inequity." The New York Times —