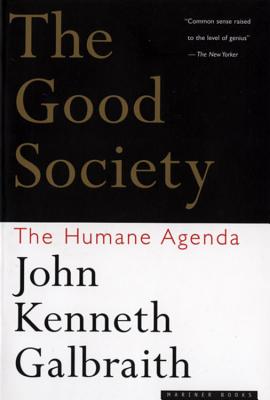 Galbraith also recognizes human weakness, differences in ability and motivation, and the formidable obstacles facing those who challenge the status quo. No one else explains the interplay of economic and political forces with Galbraith's exquisite clarity.

John Kenneth Galbraith (1908-2006) was a critically acclaimed author and one of America's foremost economists. His most famous works include The Affluent Society, The Good Society, and The Great Crash. Galbraith was the recipient of the Order of Canada and the Robert F. Kennedy Book Award for Lifetime Achievement, and he was twice awarded the Presidential Medal of Freedom.

"Nearing 90 years of age and with 30 books to his credit, Galbraith is in a position to sit back and reflect. Contemplating what kind of society we can have and what kind we seem to want to have, he tries to reconcile the differences. Galbraith holds out--and holds out for--"the good society." He knowingly appropriates this frequently used phrase, acknowledging that it was first used in the 1920s by Walter Lippmann in his same-titled "defense" of the principles of liberalism. Timed to stir both voters and candidates, The Good Society calls for compassionate social responsibility. Galbraith suggests that the current political agenda that attacks the poor received the explicit support of less than one-fourth of the electorate, and he makes the case that the "haves" can still have it without having to have it all. Because of who Galbraith is, this will be an important book, and libraries wanting to strengthen collections to cover topics relevant to the presidential election campaign may want extra copies." Booklist, ALA —