About Time: A History of Civilization in Twelve Clocks (Hardcover) 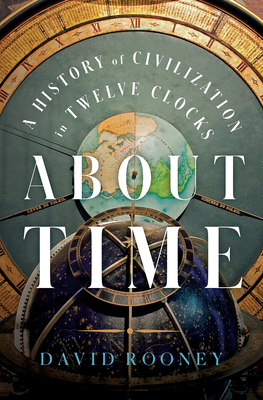 One of Smithsonian Magazine's Ten Best History Books of 2021

A captivating, surprising history of timekeeping and how it has shaped our world.

For thousands of years, people of all cultures have made and used clocks, from the city sundials of ancient Rome to the medieval water clocks of imperial China, hourglasses fomenting revolution in the Middle Ages, the Stock Exchange clock of Amsterdam in 1611, Enlightenment observatories in India, and the high-precision clocks circling the Earth on a fleet of GPS satellites that have been launched since 1978. Clocks have helped us navigate the world and build empires, and have even taken us to the brink of destruction. Elites have used them to wield power, make money, govern citizens, and control lives—and sometimes the people have used them to fight back.

Through the stories of twelve clocks, About Time brings pivotal moments from the past vividly to life. Historian and lifelong clock enthusiast David Rooney takes us from the unveiling of al-Jazari’s castle clock in 1206, in present-day Turkey; to the Cape of Good Hope observatory at the southern tip of Africa, where nineteenth-century British government astronomers moved the gears of empire with a time ball and a gun; to the burial of a plutonium clock now sealed beneath a public park in Osaka, where it will keep time for 5,000 years.

Rooney shows, through these artifacts, how time has been imagined, politicized, and weaponized over the centuries—and how it might bring peace. Ultimately, he writes, the technical history of horology is only the start of the story. A history of clocks is a history of civilization.

David Rooney is a historian of technology and former curator of timekeeping at the Royal Observatory, Greenwich. He helps run three horological institutions, including the world’s oldest clock and watch museum, and lives in London, close to the Greenwich meridian.

Fascinating....
with [Rooney’s] book in hand, and an eye on the world that sustains us, we
might just save ourselves.
— Jonathon Keats - Forbes

People say time is money, but David Rooney knows better. In this information-packed swoop through history and into the future, he exposes time’s many identities along with the hidden agendas of clocks. Time is knowledge. Time is power. Time is faith. Time is destiny.
— Dava Sobel, author of Longitude

Not merely an horologist’s delight, but an ingenious meditation on the nature and symbolism of time-keeping itself. From the medieval hourglass to the Doomsday Clock, from Jaipur to Jodrell Bank, from GMT to GPS, Rooney ticks off time in a highly entertaining series of historical tales and parables which also give pause for thought and sometimes alarming reflections. I will never hear the pips, or ask ‘what’s the time?’ in quite the same way again. A striking success.
— Richard Holmes, author of The Age of Wonder

About Time is an utterly dazzling book, the best piece of history I have read for a long time. From sundials in ancient Rome to astronomical, water-driven, mechanical, and atomic timepieces used throughout history and across cultures, Rooney has written the definitive book on these remarkable objects that give order to everyday life. It is a moving and beautifully written book that even takes us 5,000 years into the future with plutonium clocks ticking away beneath our feet. There will be many puns about this as a timely book; in fact, it is timeless.

— Jerry Brotton, author of A History of the World in Twelve Maps

The measurement of time is a convenience, a jailor, a tyrannical device. David Rooney’s delightful and discursive work anatomizes that tyranny. Page after page offers up instances of time’s ubiquity and its mercurial power to get into the interstices of the everyday.
— Jonathan Meades

Enthralling and important, About Time takes us deep into the past and far into the future. With David Rooney as personable guide, we peer inside clocks from Kyoto to Cape Town, discovering what they meant to the diverse people who made them, used them, whose lives were ruled by them…This is a gripping and revealing account of time, and humanity’s changing relationship with it.

— Seb Falk, author of The Light Ages: The Surprising Story of Medieval Science

David Rooney’s passionate enthusiasm for everything clock-related leaps off every page. The vivid writing, engaging stories, and autobiographical details combine to offer a rich and generous picture of the history of clocks, from China and Japan to Central Europe, the Middle East and outer space. In clear, pacey, and evocative prose, Rooney’s volume takes in ancient wonders and modern marvels, leaving us at once enlightened and moved.
— Ludmilla Jordanova, author of History in Practice