The Long Haul: A Trucker's Tales of Life on the Road (Paperback) 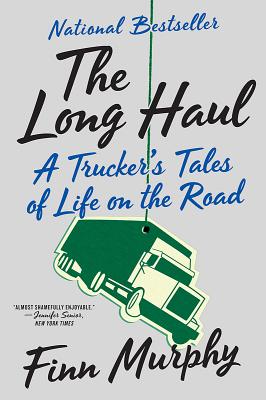 By Finn Murphy
$16.95
On our shelves now at one or more of our stores

When I was a kid I had two dreams for when I grew up: I would be either a symphony musician or a long haul trucker. How I ended up a bookseller is anyone's guess, but the romance of the road has remained with me, so I was a natural for the Long Haul. Finn Murphy tells a great story of a life lived on his own terms. After dropping out of college he took up with a long distance mover and built a career as a mover of wealthy executive types and earning a six figure living for himself. Murphy is a natural story teller and his book never sags. This is a great summer read.

“This memoir of a life spent driving trucks full of strangers' personal belongings across the country is the book I didn't know I needed. Finn Murphy writes engaging slice-of-life stories about his time as a long-haul truck driver while also showing the changes in the trucking industry and American life in the decades he's spent pulling thousands of pounds up mountains, through storms, and across plains. Trucking is a solitary life, but Murphy grabbed me like a friend and took me with him on his journey.”
— Jamie Thomas (E), Women & Children First, Chicago, IL

“A thoroughly enjoyable memoir of the romance and reality of a life on the road—specifically, a long-haul mover, or ‘bedbugger,’ in the terms of the trade—that manages to be as wise about class and culture in modern America as any academic treatise.”
— Tom Nissley, Phinney Books, Seattle, WA

More than thirty years ago, Finn Murphy dropped out of college to become a long-haul trucker. Since then he’s covered more than a million miles as a mover, packing, loading, hauling people’s belongings all over America. In The Long Haul, Murphy recounts with wit, candor, and charm the America he has seen change over the decades and the poignant, funny, and often haunting stories of the people he encounters on the job.

Finn Murphy grew up in Connecticut and now lives in Colorado. He started working as a long-haul trucker in 1980. The Long Haul is his first book.

Like a Mark Twain behind the wheel, [Murphy] takes us on the road coast to coast and city to city with a voice that’s honest and direct and sometimes even poetic.
— Bob Ryan - Boston Globe

It’s a hoot to ride along with Murphy.
— Irene Wanner - Seattle Times

The Long Haul is funny and sad and wise, and it shows us the lives of people we depend on.

— Matthew B. Crawford, author of Shop Class as Soulcraft

The Long Haul delivers because it is a survey of a culture fused to a working man’s memoir—and Murphy, smartly, avoids sentiment and lazy comparisons.

Like priests, movers shepherd us through life’s transitions; like cowboys, truckers drive the roads we’ll never know. Both see America in ways the rest of us don’t. In The Long Haul, Murphy… bring[s] us into his semi-mythic world.

An adventure story and… a peek into an occupation whose practitioners we see rolling down the highway.
— Jim Higgins - Milwaukee Journal Sentinel

The Long Haul beguil[es] readers with wit, wisdom and observations born from decades in transit.

Finn Murphy… bring[s] readers along for a rollicking ride through a trucker’s world and [provides] an insider’s eye, pairing it with an involving series of encounters.
— Midwest Book Review