The Collective: A Novel (Paperback) 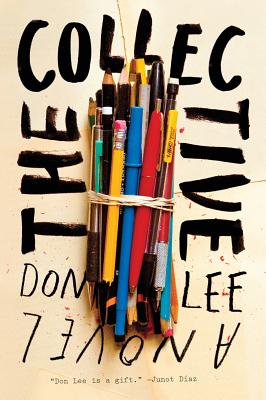 Asian-American characters have never been more multi-faceted than they are in this novel that defies racial stereotypes while giving us a glimpse of the struggles of being a starving artist. Our central character gets hit by a car and dies on the second page. It is impossible to stop reading from there as we rewind several years back.

“In this sometimes heartbreaking, at other times hilarious novel, Eric Cho contemplates the life of Joshua Yoon, the Korean novelist with whom he, along with provocative visual artist Jessica Tsai, once formed the 3AC or Asian American Artists Collective, first in college and later in Cambridge. What may have led Joshua to commit suicide - or was it? - by running into the path of an oncoming car? Lee once again tackles identity themes, but this time through the lens of the college novel. A triumph!”
— Daniel Goldin, Boswell Book Company, Milwaukee, WI

"Riveting, moving, and—most impressive—agile and resourceful in its approach to race. Don Lee explores that issue from every conceivable angle, raising a thousand questions and undercutting easy answers." —Jennifer Egan

Joshua Yoon, Eric Cho, and Jessica Tsai arrive at Macalester College with different baggage but a singular and overpowering ambition—to become artists. As the years progress, their resolve is tested first by an act of campus racism and later, while they’re living together as adults in Cambridge, by a set of real-world demands and distractions that ultimately drive them in vastly different directions. A dazzling exploration of racial identity and the queasy position of the artist in contemporary America, Don Lee’s latest is a landmark achievement—his most funny, tragic, and revealing book yet.

Winner of the 2013 Asian/Pacific American Award for Literature

Don Lee is the author of the novels The Collective, Wrack and Ruin, and Country of Origin, and the story collection Yellow. He has received an American Book Award, the Asian/Pacific American Award for Literature, the Sue Kaufman Prize for First Fiction, the Edgar Award for Best First Novel, an O. Henry Award, and a Pushcart Prize. He teaches in the MFA program in creative writing at Temple University and splits his time between Philadelphia and Baltimore.

Offering strong characterizations and thought-provoking prose, Lee addresses the Asian American experience from various vantage points, realistically examining themes ranging from personal relationships to racism and artistic censorship. His novel has enough depth to spark uninhibited discussion in any book group and given its time frame, will have special meaning for Gen X readers.
— Library Journal

A fine prose stylist…he credibly addresses the political and social concerns of a specific demographic, while also rendering a work that will feel relatable to nearly everyone who reads it.
— Time Out New York