Elegies for the Brokenhearted: A Novel (Paperback) 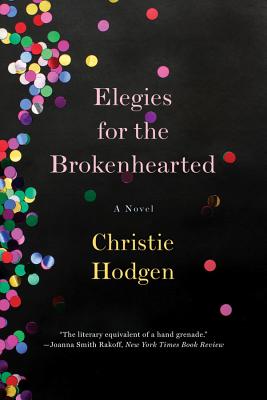 You can often tell a lot about someone by what they think of others. In Christie Hodgen's novel, there are five elegies written by Mary Murphy about five people who had an influence on her life. The prose is powerful and compelling, as more is revealed about Mary's own difficult life. This book will knock your proverbial socks off!

“In this savvy, spirited, moving, and surprisingly humorous novel, Mary Murphy tells her own story as she paints lively portraits of the people with whom she's crossed paths.”
—

Who are the people you’ll never forget? For Mary Murphy, there are five, eulogized here in an utterly unforgettable voice. Mary tells the story of her own life—her childhood spent trading one home and father figure for another, her efforts to track down her rebellious sister, and her winding search for purpose—through her experiences and encounters with the people who shaped her path. The result is an unconventional and moving story about identity, family, and belonging.

Christie Hodgen is the author of Elegies for the Brokenhearted; Hello, I Must Be Going; and A Jeweler’s Eye for Flaw. She has won the AWP Award for Short Fiction and the Pushcart Prize. She teaches at the University of Missouri–Kansas City, where she lives.

[An] absorbing novel…Hodgen’s magnificent, heart-breaking journey with its moving finish is an unforgettable novel, a must-read.
— Booklist, starred review

The protagonist is a nobody that everybody will root for.
— Colleen Hodgetts - Feminist Review

This book has heart…Christie Hodgen’s prose embodies the paradox of really fine fiction, which travels to the universal through the particular.
— Jeffrey Ann Goudie - Kansas City Star

Deep, dark, and beautiful, Christie Hodgen’s story of a fabulously flawed family reads like a quintessentially American tale.... The generational cast of quirky, yet completely believable characters, the heartbreak and redemption as time unfolds, and Hodgen’s biting humor and exquisite writing all add up to a tremendous novel. Book clubs: put this one on your lists.
— Lolly Winston, author of Happiness Sold Separately

Elegies for the Brokenhearted is brilliant, gorgeous, illuminated writing. Hodgen writes like a Christian mystic who has God speaking through her mingled with her own wild, lyrical mix of popular culture and high art. What a voice!

— Clancy Martin, author of How to Sell

This stellar novel shows us once again that Christie Hodgen is hilarious, hugely talented, and full of luminous passion. In inspired prose, she tells the stories of those who have strung themselves around the heart of Mary Murphy, that undefeated heroine who cannot stop speaking to her loved ones, long after they’ve left.
— Deb Olin Unferth, author of Vacation