In the Valley of the Kings: Stories (Hardcover) 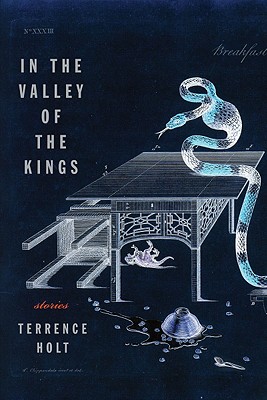 By Terrence Holt
Unavailable at this time.
Out of print

“This is the secret book at the heart of American letters. Holt is one of the finest American writers alive.”—Junot Díaz

In the Valley of the Kings marks the extraordinary debut of Terrence Holt, who fifteen years ago abandoned a promising writing career to practice medicine. Moved by his patients’ valor in the face of death, seeking to comprehend the mysteries revealed at their bedside, Holt has taken up fiction again. He emerges now with this astonishing collection of one novella and seven short stories that explore the farthest reaches of the imagination in a style that recalls the nineteenth-century American masters.

Holt leaps across genres and millennia, from small-town America to deep space, daring his readers to journey with him into realms as mysterious as they are unforgettable. The opening story, “‘? ????s,” is a chilling account of the last days of the human race, as the hospitalization of a little girl in a New England town heralds a terrifying plague, transmitted not by a microbe but by a single word. The final story, “Apocalypse,” returns to small-town New England and another vision of the end, in an intimate account of how a couple struggles to live and love under the shadow of the Earth’s approaching doom. In between, these stories range from outer space, where—in “Charybdis”—an astronaut alone on a doomed NASA mission comes to terms with his fate, to the Egyptian desert of the title novella, where an archaeologist seeks a fabulous tomb that holds the secret of immortality. Painting with lurid colors and finely crafted prose, Holt offers his readers haunting visions of the reefs and abysses of the human imagination. In the Valley of the Kings redefines the art of the story, throwing aside the rules in search of the enduring truths that ultimately make stories worth reading.

Terrence Holt is a writer and an internist specializing in geriatric medicine, teaching and practicing at the University of North Carolina in Chapel Hill.

American short fiction in particular—from Poe and Hawthorne to the present—unfurls at midnight: a dark affair emphasizing our want of health in a civilization gone sick. Terrence Holt’s first story collection, In the Valley of the Kings, now joins the brigade....These stories will endue for as long as our hurt kind remains to require the truth.

Starred Review. In his debut collection, practicing physician Holt takes on the big cosmological questions in stunning fashion, recalling writers like Conrad, Hawthorne, and Melville in the scope of his interests and the grandeur of his style....This collection represents a life's work of stories that are not well known outside of the readership of literary journals. That's about to change, and it's a good thing.
— Library Journal

Starred Review. In this haunting collection, Holt's lush language pulls literary treasures out of dark places, bringing readers ice from the rings of Saturn 'where seeing and vanishing are one,' a cartouche from deep within an ancient tomb and the late-night conversations of a married couple awaiting the end of the world....This collection, with its allusions to mythology and tragic conundrums, demands intelligence and rewards the reader with Borgesian riches.
— Publishers Weekly

Holt is my favorite writer. Primarily because he's awesome but also (and no less important) because he is sui generis.

Terrence Holt's prose is deeply original, evocative, transforming. I have never seen anything quite like it before. Though what I'm praising is not words, nor is it narrative, but something that is a compound of language, story, feeling, and knowledge—and something else. Something beyond his learning as a physician, at once meta-physical and physical, mysterious and terrifying, but not indulgent. Even undecipherable. He is amazing.
— Gerald Stern, winner of the National Book Award for This Time

Like the tales of Poe and Hawthorne, these stories are claustral, eerie and entirely exhilarating.
— Michael Gorra, author of The Bells in Their Silence

In the Valley of the Kings is a work of terrific intelligence and terrifying imagination.

— Aleksandar Hemon, finalist for the National Book Award for The Lazarus Project