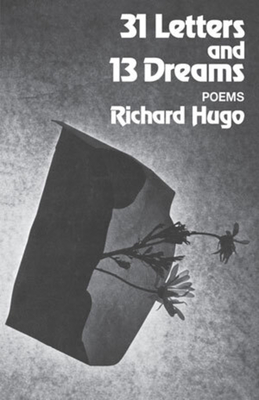 Richard Hugo, whom Carolyn Kizer has called” one of the most passionate, energetic, and honest poets living,” here offers an extraordinary collection of new poems, each one a “letter” or a “dream.” Both letters and dreams are special manifestations of alone-ness; Hugo’s special senses of alone-ness, of places, and of other people are the forces behind his distinctively American and increasingly authoritative poetic voice.

Each letter is written from a specific place that Hugo has made his own (a “triggering town,” as he has called it elsewhere) to a friend, a fellow poet, an old love. We read over the poet’s shoulder as the town triggers the imagination, the friendship is re-opened, the poet’s selfhood is explored and illuminated. The “dreams” turn up unexpectedly (as dreams do) among the letters; their haunting images give further depth to the poet’s exploration. Are we overhearing them? Who is the “you” that dreams?

Richard Hugo was for many years the director of the creative writing program at the University of Montana, Missoula Campus. He received the Theodore Roethke Memorial Prize and was twice nominated for the National Book Award.