Liar's Poker: Rising Through the Wreckage on Wall Street (Hardcover) 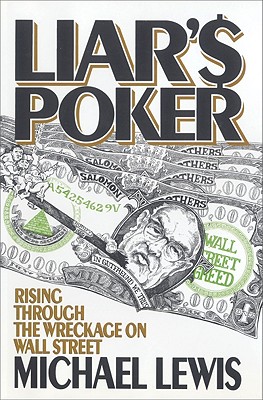 By Michael Lewis
Unavailable at this time.
Out of print


With the eye and ear of a born storyteller, Michael Lewis shows us how things really worked on Wall Street. In the Salomon training program a roomful of aspirants is stunned speechless by the vitriolic profanity of the Human Piranha; out on the trading floor, bond traders throw telephones at the heads of underlings and Salomon chairman Gutfreund challenges his chief trader to a hand of liar's poker for one million dollars; around the world in London, Tokyo, and New York, bright young men like Michael Lewis, connected by telephones and computer terminals, swap gross jokes and find retail buyers for the staggering debt of individual companies or whole countries.

The bond traders, wearing greed and ambition and badges of honor, might well have swaggered straight from the pages of Bonfire of the Vanities. But for all their outrageous behavior, they were in fact presiding over enormous changes in the world economy. Lewis's job, simply described, was to transfer money, in the form of bonds, from those outside America who saved to those inside America who consumed. In doing so, he generated tens of millions of dollars for Salomon Brothers, and earned for himself a ringside seat on the greatest financial spectacle of the decade: the leveraging of America.