When You Reach Me (Library Binding) 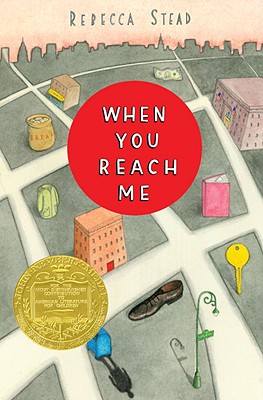 Winner of the 2010 John Newbery Medal

By sixth grade, Miranda and her best friend, Sal, know how to navigate their New York City neighborhood. They know where it’s safe to go, like the local grocery store, and they know whom to avoid, like the crazy guy on the corner.

But things start to unravel. Sal gets punched by a new kid for what seems like no reason, and he shuts Miranda out of his life. The apartment key that Miranda’s mom keeps hidden for emergencies is stolen. And then Miranda finds a mysterious note scrawled on a tiny slip of paper:

I am coming to save your friend’s life, and my own.
I must ask two favors. First, you must write me a letter.

The notes keep coming, and Miranda slowly realizes that whoever is leaving them knows all about her, including things that have not even happened yet. Each message brings her closer to believing that only she can prevent a tragic death. Until the final note makes her think she’s too late.

Rebecca Stead is the author of "First Light." She lives in Manhattan with her husband and their two sons. "From the Hardcover edition."

Starred Review, Kirkus Reviews, June 1, 2009:
"[W]hen all the sidewalk characters from Miranda's Manhattan world converge amid mind-blowing revelations and cunning details, teen readers will circle back to the beginning and say,'Wow ... cool.'"

Starred Review, Booklist, June 1, 2009:
"[T]he mental gymnastics required of readers are invigorating; and the characters, children, and adults are honest bits of humanity no matter in what place or time their souls rest."

Starred Review, The Horn Book Magazine, July & August, 2009:
"Closing revelations are startling and satisfying but quietly made, their reverberations giving plenty of impetus for the reader to go back to the beginning and catch what was missed."

Review, The Wall Street Journal, July 17, 2009:
"Readers ... are likely to find themselves chewing over the details of this superb and intricate tale long afterward."