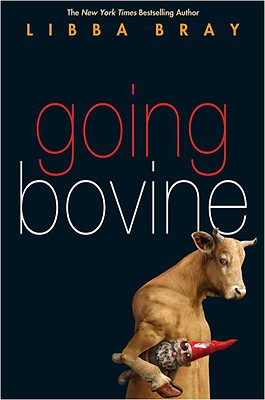 “Libba Bray's narrative of the surreal adventures of 16-year-old Cameron, recently diagnosed with mad cow disease, will take you everywhere -- from his pain-ridden hospital bed, to a happiness cult, to the Party House in Florida. Going Bovine is a great read for anyone ready for an adventure.”
— Cassie Denton, Bookshelf At Hooligan Rocks, Truckee, CA

Can Cameron find what he’s looking for?


All 16-year-old Cameron wants is to get through high school—and life in general—with a minimum of effort. It’s not a lot to ask. But that’s before he’s given some bad news: he’s sick and he’s going to die. Which totally sucks. Hope arrives in the winged form of Dulcie, a loopy punk angel/possible hallucination with a bad sugar habit. She tells Cam there is a cure—if he’s willing to go in search of it. With the help of a death-obsessed, video-gaming dwarf and a yard gnome, Cam sets off on the mother of all road trips through a twisted America into the heart of what matters most.

Libba Bray is the author of the "New York Times "bestselling Gemma Doyle Trilogy. She lives in Brooklyn, New York. Visit her at www.libbabray.com. "From the Hardcover edition."