Aiding and Abetting: A Novel (Paperback) 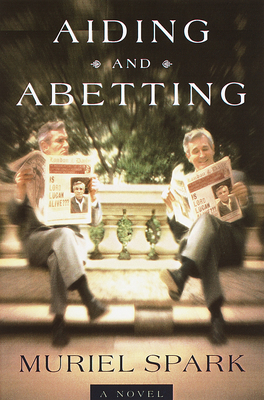 In Aiding and Abetting, the doyenne of literary satire has written a wickedly amusing and subversive novel around the true-crime case of one of England’s most notorious uppercrust scoundrels and the “aiders and abetters” who kept him on the loose.

When Lord Lucan walks into psychiatrist Hildegard Wolf’s Paris office, there is one problem: she already has a patient who says he’s Lucan, the fugitive murderer who bludgeoned his children’s nanny in a botched attempt to kill his wife. As Dr. Wolf sets about deciding which of her patients, if either, is the real Lucan, she finds herself in a fierce battle of wills and an exciting chase across Europe. For someone is deceiving someone, and it may be the good doctor, who, despite her unorthodox therapeutic method (she talks mainly about her own life), has a sinister past, too.
Exhibiting Muriel Spark’s boundless imagination and biting wit, Aiding and Abetting is a brisk, clever, and deliciously entertaining tale by one of Britain’s greatest living novelists.

Muriel Spark is the author of twenty-one novels. She lives in Tuscany, Italy.

“Elegant and chilling. . . . A trickily plotted black comedy that reads at once as a morality play and a glittering entertainment.” –The New York Times

“Strangely gripping and gnomically illuminating. . . . Spark has produced one of the best of her sui-generis novels.” –John Updike, The New Yorker

“A killer, his double, a shrink and her lover are the core cast of madcap characters in this gleefully grisly novel. . . . Spark does a remarkable job of weaving wacky personalities and gruesome details into a fast-moving, subversive comedy. . . . This book will make you laugh out loud.” –The Wall Street Journal