The Amazing Adventures of Aaron Broom: A Novel (Hardcover) 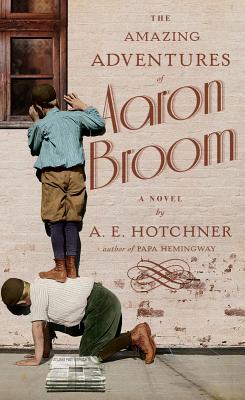 12 year-old Aaron Broom, barely surviving St. Louis during The Depression, sees his father taken into police custody as a witness to a jewelry store robbery. With no resources, a police-secured apartment and no way to event visit his father, Aaron relies on Auggie, the street-smart newsboy, and other dubious characters to gather key information. Sleeping in a borrowed hammock in a homeless camp, Aaron approaches a sympathetic lawyer. Immediately engaging, this gem of Hotchner's vividly narrates Aaron's escapades and close calls. In a light, delectable manner, so natural to this storyteller supreme!

Twelve-year-old Aaron Broom is protecting his father’s car from repossession when he witnesses a jewelry store robbery gone wrong. To Aaron’s shock, his father, a struggling salesman in the wrong place at the wrong time, is fingered as the prime suspect in the murder. Aaron—precocious, plucky, not a little naïve—must seek out gangsters, diamond dealers, bootleggers, and street kids in order to prove his father’s innocence.

In his search for justice, Aaron draws upon the resources of a world-weary paperboy, an aspiring teen journalist, and a kindly lawyer. As they dig into the details of the case, these unconventional detectives reveal a cover-up that goes much deeper than a jewelry-store heist gone sour. Through it all, Aaron’s optimism and resourcefulness shine through. Hotchner’s latest is a rollicking ride through St. Louis at its lowest, as seen through the eyes of his most lovable narrator to date.

A. E. Hotchner is the author of the international bestsellers Papa Hemingway, Doris Day: Her Own Story, Sophia, and his own memoir, King of the Hill. He has adapted many of Hemingway’s works for the screen, and he is the founder, with Paul Newman, of Newman’s Own.

"A. E. Hotchner has created a wonderful, moving, action-packed novel. The Amazing Adventures of Aaron Broom will long remain a pillar of the American literary lexicon.  Distinguish yourself and buy it now!"
--Winston Groom, New York Times bestselling author of Forrest Gump

"Hotchner is always a wonderful read."
--Alec Baldwin, New York Times bestselling co-author (with Kurt Andersen) of You Can’t Spell America Without Me

"Everyone who reads Hotchner’s new novel will find a kindred spirit in young Aaron Broom. Each scene is vivid and every character authentic, as only a master of fiction could make them. Thoroughly enjoyable from start to finish."
--Stuart Woods, New York Times bestselling author of Shoot First

"Hotchner's storytelling is fast-paced, his feel for period detail sure-handed, his vision of humanity-facing-adversity persistently sunny, and his regard for the boy's resourcefulness contagious. A brisk, winsome caper."
--Kirkus

"Aaron’s efforts would make the Hardy Boys envious as . . . Aaron begins putting together the pieces of an intricate puzzle that will lead him to a court denouement reminiscent of Perry Mason . . . Hotchner has obviously lost none of his writer’s chops. With an appealing protagonist and a feel-good, slightly old-fashioned story, the venerable author’s latest is a diverting exercise in storytelling that is sure to delight his many fans."
--Booklist