The System: The Glory and Scandal of Big-Time College Football (Hardcover) 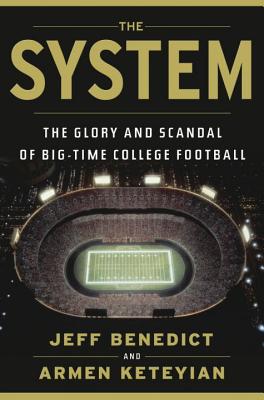 AN EXPLOSIVE AND REVELATORY PORTRAIT REPORTED FROM DEEP BEHIND THE SCENES OF BIG-TIME NCAA COLLEGE FOOTBALL: THE PASSION, THE THRILLING ACTION AND THE SHOCKING REALITIES THAT LIE BENEATH THIS COLOSSAL, MULTIBILLION-DOLLAR BUSINESS
COLLEGE FOOTBALL has never been more popular or more chaotic. Millions fill 100,000-seat stadiums every Saturday; tens of millions more watch on television every weekend. The 2013 Discover BCS National Championship game between Notre Dame and Alabama had a viewership of 26.4 million people, second only to the Super Bowl. Billions of dollars from television deals now flow into the game; the average budget for a top-ten team is $80 million; top coaches make more than $3 million a year; the highest paid, more than $5 million.
But behind this glittering success are darker truths: athlete-students working essentially full-time jobs with no share in the oceans of money; players who often don t graduate and end their careers with broken bodies; janitors who clean up player misconduct; football hostesses willing to do whatever it takes to land a top recruit; seven-figure black box recruiting slush funds. And this: Despite the millions of dollars pouring into the game, 90 percent of major athletic departments still lose money. Yet schools remain caught up in an ever-escalating arms race at the expense of academic scholarships, facilities and faculty.
Celebrated investigative journalists Jeff Benedict and Armen Keteyian were granted unprecedented access during the 2012 season to programs at the highest levels across the country at a time of convulsive change in college football. Through dogged reporting, they explored every nook and cranny of this high-powered machine, and reveal how it operates from the inside out. The result: the system through the eyes of athletic directors and coaches, high-flying boosters and high-profile TV stars, five-star recruits and tireless NCAA investigators and the kids on whom the whole vast enterprise depends.
Both a celebration of the power and pageantry of NCAA football and a groundbreaking, thought-provoking critique of its excesses, "The System" is the definitive book on the college game.

JEFF BENEDICT is one of the country s top investigative reporters. He is a special features contributor for "Sports Illustrated" and the author of ten critically acclaimed books, including "Pros and Cons" and "Out of Bounds." His essays and articles have appeared in the "New York Times," "Newsweek "and the "Los Angeles Times, " among other publications.

ARMEN KETEYIAN is a CBS News correspondent based in New York and the lead correspondent for "60 Minutes Sports" on Showtime. An eleven-time Emmy Award winner, he is widely regarded as one of the finest investigative journalists in the country. He is also the author or coauthor of nine previous books, including "Money Players" and "Raw Recruits.""

"The best book on the sport written in years (and that's coming from someone who has written a couple). The System will shock fans as the saturation reporting peels back the veneer on everything from coaching politics, to sexual tension in tutoring labs, to the role of recruiting hostesses, to back-stabbing conference realignment, to super boosters, and so on. Even the hardcore fans, though, will be surprised -- everyone knows this is a wild business, just not in such detail...There's just no way a college football fan won't devour this book."
--Dan Wetzel, Yahoo!Sports

"The System is hands-down the best college football book I've ever read. It is that rare non-fiction book that reads like a great crime novel in that you just can't put it down. The System covers the good, the bad and the ugly in the world of college football, including an inside look at a walk-on being picked in the first round of the NFL draft, big-time college football scandals and an epidemic of criminal behavior by players on campus. It's a completely unvarnished look at the second-most popular sport in the country that will leave you aghast at the underworld that exists beneath college stadiums."
--Jim Weber, LostLettermen.com

"There is a major storm brewing on college football's horizon. At the eye of the storm is a book that is a must-read for hardcore college football fans who want to know the truth about 'The System.'"
--Frank Cooney, The Sports Exchange

"[A] harrowing and occasionally uplifting journey -- or literary trip -- through recent history and across the country's most football-obsessed campuses."
--Harvey Araton, The New York Times

"One of the most sweeping yet meticulously researched books ever written on big-time college football...."The System" isn't just a good read. For anyone who cares about major college athletics, it is a vital read. "The System" isn't about one aspect of college football. It's about every aspect....arresting....in the end, the beauty is not in the shock value, but in the detail, shocking and mundane, that is so carefully presented."
--The Hartford Courant

"The System is a broad survey of the machinery of college football: the money and marketing, the recruiting and classroom pampering, the off-the-books privileges. The authors trace the efforts of various programs and coaches who try to avoid the excess and trickery and do right by their student-athletes. But clearly the system is hard to beat, and it has a corrupting effect on nearly everyone involved."
--The Wall Street Journal


"I just read and can't stop extolling The System: The Glory and Scandal of Big-Time College Football by Jeff Benedict and Armen Keteyian (reviewed below). I expected scandal, I expected feel-good stories; what I didn't expect was a book so riveting that I missed my bus stop...Jeff Benedict and Armen Keteyian have given us a thrilling read."
--Marilyn Dahl, editor, Shelf Awareness for Readers