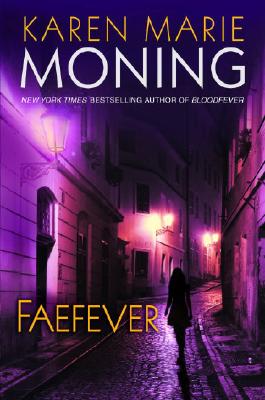 The New York Times bestselling author of Darkfever and Bloodfever returns to Dublin’s Fae-infested shores in a bold, sensual new novel. Hurtling us into a realm of seduction and shadows, Karen Marie Moning tells the enthralling tale of a woman who explores the limits of her mysterious powers as she enters a world of ancient sorcery—and confronts an enemy more insidious than she could ever have imagined.

He calls me his Queen of the Night. I’d die for him. I’d kill for him, too. When MacKayla Lane receives a torn page from her dead sister’s journal, she is stunned by Alina’s desperate words. And now MacKayla knows that her sister’s killer is close. But evil is closer. And suddenly the sidhe-seer is on the hunt: For answers. For revenge. And for an ancient book of dark magic so evil, it corrupts anyone who touches it.

As All Hallows’ Eve approaches and the city descends into chaos, as a shocking truth about the Dark Book is uncovered, not even Mac can prevent a deadly race of immortals from shattering the walls between worlds—with devastating consequences.…

Karen Marie Moning graduated from Purdue University with a bachelor's degree in Society & Law. Her novels have appeared on the "New York Times, USA Today," and "Publishers Weekly" bestseller lists and have won numerous awards, including the prestigious RITA Award.