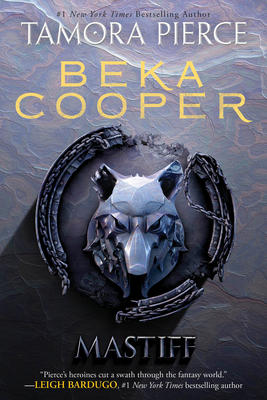 This is book number 3 in the Beka Cooper series.

A New York Times bestseller from the fantasy author who is legend herself: TAMORA PIERCE. In the final book in the Beka Cooper Trilogy, Beka uses her unique magic and street smarts to crack the case that will change an empire!

The more secret the Hunt, the more dangerous the mission.

Sometimes a distraction arrives at just the right time. After suffering a terrible loss, Beka is grateful when Lord Gershom calls on her with a top-secret Hunt. He informs Beka that she and her scent hound, Achoo, are the best team for the job, but he won't tell her anything else. And when the pair is joined by a wide-eyed young mage who seems too green to be on a case of such importance, it becomes clear that threats lurk around every corner. Soon they are wading deep into a world of power, corruption, and betrayal that threatens the Tortall royal family. Beka must decide whom she can trust with her country's future . . . and her life.

The Beka Cooper Trilogy introduces an amazing young woman who is the ancestor of one of Tamora Pierce's most popular characters: George Cooper. Here, Pierce gives fans exactly what they want—a smart, savvy heroine making a name for herself on the mean streets of Tortall's Lower City—while offering plenty to appeal to new readers as well!

"Pierce has long been lauded for her kickass heroines, and in Beka she has created her most compelling, complicated character...[T]his novel provides both crackerjack storytelling and an endearingly complex protagonist."—Kirkus Reviews, STARRED REVIEW

“Tamora Pierce’s novels gave me a different way of seeing the world."
—ALAYA DAWN JOHNSON, award-winning author of Love Is the Drug