Cause for Alarm (Paperback) 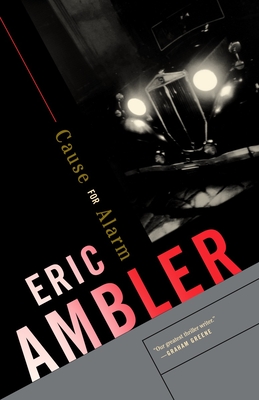 Nicky Marlow needs a job. He’s engaged to be married and the employment market is pretty slim in Britain in 1937. So when his fiancé points out the Spartacus Machine Tool notice, he jumps at the chance. After all, he speaks Italian and he figures he’ll be able to endure Milan for a year, long enough to save some money. Soon after he arrives, however, he learns the sinister truth of his predecessor’s death and finds himself courted by two agents with dangerously different agendas. In the process, Marlow realizes it’s not so simple to just do the job he’s paid to do in fascist Italy on the eve of a world war.

Eric Ambler is often said to have invented the modern suspense novel. Beginning in 1937, he wrote a series of novels that introduced ordinary protagonists thrust into political intrigue they were ill-prepared to deal with. These novels were touted for their realism, and Ambler established himself as a thriller writer of depth and originality. In the process he paved the way for such writers as John Le Carre, Len Deighton, and Robert Ludlum.

“An unusually good tale of espionage from a master storyteller.”–The New Yorker

“The best spy story in a long time.” —The New York Times

“Exciting and authentic. Mr. Ambler has fashioned an excellent novel of suspense that is intelligently crafted.” —Saturday Review