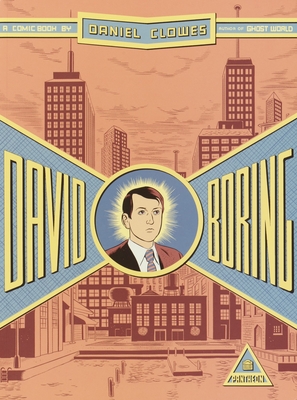 Meet David Boring: a nineteen-year-old security guard with a tortured inner life and an obsessive nature. When he meets the girl of his dreams, things begin to go awry: what seems too good to be true apparently is. And what seems truest in Boring's life is that, given the right set of circumstances (in this case, an orgiastic cascade of vengeance, humiliation and murder) the primal nature of humankind will come inexorably to the fore.

"Boring finds love with a mysterious woman named Wanda, loses her and sort of finds her again. He also gets shot in the head (twice) and stranded on an island with his brutish family. Meanwhile, the world may or may not be ending soon. And did I mention that much of this is hilariously funny?" -- Time

Daniel Clowes was born in Chicago in 1961. He is the creator of the comic book Eight-Ball, twenty-one issues of which have been published to date. His work has appeared in Esquire, The New Yorker, Vogue, Time, and Newsweek, among others. A feature film based on his 1998 book, Ghost World, starring Thora Birch, will be released in 2001 by MGM. He lives a childless, petless life in California with his beloved wife.

"It's impossible to write about Daniel Clowes's work without using the word "ennui." But his is a joyous ennui, if such a thing is possible, one that relishes the boredom of everyday life with a Zen enthusiasm. . . Clowes finds little miracles everywhere he looks—so many, in fact, that they seem hardly to interest him. This detachment perversely makes David Boring deeply compelling and worthy of serious attention from fans and newcomers alike."
—Rob Lightner

"[A] serious and innovative work, and it's never boring."
—Publisher's Weekly