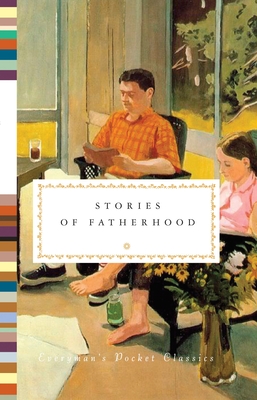 By Diana Secker Tesdell (Editor)
$16.00
On our shelves now at one or more of our stores

Stories of Fatherhood gathers more than a century of classic short stories about having, becoming, loving, and losing fathers.

Frank O’Connor’s hilarious tale of a tiny boy’s war against his paternal rival in “My Oedipus Complex” sits beside Ann Packer’s touching portrait of a man preparing for the wonder and terror of his first child’s birth. At the other end of the lifespan, John Updike’s “My Father’s Tears,” Jim Shepard’s “The Mortality of Parents,” and William Maxwell’s “The man who lost his father” bring us face to face with a loss that is like no other.
In between, we encounter a full range of emotions connecting men and their offspring:  tenderness and devotion, anxiety and incomprehension, admiration and regret. Powerful patriarchs cast a long shadow in Katherine Mansfield’s “The Daughters of the Late Colonel” and D. H. Lawrence’s “The Christening,” while Edith Wharton’s “His Father’s Son” sheds a more ironic light on the paternal legacy. E. L. Doctorow’s young protagonist, forced to write letters impersonating his dead father, arrives at a deeper understanding of him, while in Helen Simpson’s “Sorry?” an old man’s hearing aid seems to reveal what his children secretly think about him. Paternal bonds are forged outside biology, too: Graham Swift portrays a man wistfully seeking a substitute son, while Guy de Maupassant’s forlorn waif triumphantly acquires an ideal father. In these twenty stories, an array of great writers—ranging from Kafka, Joyce, and Nabokov to Raymond Carver, Harold Brodkey, and Andre Dubus—offers a wonderfully varied assortment of fictional takes on paternity.

“The earmark of these collections is the quality and range of the stories, and Stories of Fatherhood holds to those standards. . . . Every story is, in its own way, a small masterpiece. . . . The book itself is compact and inexpensive; the literature within is priceless.” —Shelf Awareness

“There are as many different experiences of fatherhood as there are fathers; each experience in this collection examines a different facet, and each is beautiful and poignant, never saccharine or maudlin. . . . The collection is beautifully edited, with a perfect emotional flow from one story to the next. Dip into it gently, taking time to reflect, appreciate, and slowly savor the gems in this treasure.” –San Francisco Book Review

“A geographically, generationally, and stylistically heterogeneous array of stories. Joyce, Nabokov, and Updike are not even the most unlikely brethren in this marvelously diverse collection. . . . A surprising mix, perhaps, but one of the most instructive things about the book is that it proves a meaty theme can bridge the distance between even the most unalike of writers. It turns out that fatherhood is a theme – like war and peace or love and marriage – that everyone has a stake in.” —The Christian Science Monitor