Blood in the Water: The Attica Prison Uprising of 1971 and Its Legacy (Hardcover) 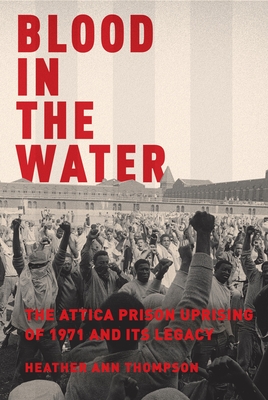 By Heather Ann Thompson
$35.00
Unavailable at this time.

PULITZER PRIZE WINNER • The definitive history of the infamous 1971 Attica Prison uprising, the state's violent response, and the victim's decades-long quest for justice. • Thompson served as the Historical Consultant on the Academy Award-nominated documentary feature ATTICA

“Gripping ... deals with racial conflict, mass incarceration, police brutality and dissembling politicians ... Makes us understand why this one group of prisoners [rebelled], and how many others shared the cost.” —The New York Times

On September 9, 1971, nearly 1,300 prisoners took over the Attica Correctional Facility in upstate New York to protest years of mistreatment. Holding guards and civilian employees hostage, the prisoners negotiated with officials for improved conditions during the four long days and nights that followed.

On September 13, the state abruptly sent hundreds of heavily armed troopers and correction officers to retake the prison by force. Their gunfire killed thirty-nine men—hostages as well as prisoners—and severely wounded more than one hundred others. In the ensuing hours, weeks, and months, troopers and officers brutally retaliated against the prisoners. And, ultimately, New York State authorities prosecuted only the prisoners, never once bringing charges against the officials involved in the retaking and its aftermath and neglecting to provide support to the survivors and the families of the men who had been killed.

Drawing from more than a decade of extensive research, historian Heather Ann Thompson sheds new light on every aspect of the uprising and its legacy, giving voice to all those who took part in this forty-five-year fight for justice: prisoners, former hostages, families of the victims, lawyers and judges, and state officials and members of law enforcement. Blood in the Water is the searing and indelible account of one of the most important civil rights stories of the last century.

(With black-and-white photos throughout)

HEATHER ANN THOMPSON is an award-winning historian at the University of Michigan. Her most recent book, Blood in the Water: The Attica Prison Uprising of 1971 and Its Legacy, won the Pulitzer Prize in History, the Bancroft Prize, the Ridenhour Book Prize, and the J. Willard Hurst Prize, and was a finalist for the National Book Award and the Los Angeles Times Book Prize, among other accolades. She is also the author of Whose Detroit?: Politics, Labor, and Race in a Modern American City and the editor of Speaking Out: Activism and Protest in the 1960s and 1970s. She served on a National Academy of Sciences blue-ribbon panel that studied the causes and consequences of mass incarceration in the United States and has given congressional staff briefings on the subject. She has written on the history of mass incarceration and its current impact for The New York Times, Time, The Atlantic, Salon, Newsweek, NBC, Dissent, New Labor Forum, and The Huffington Post, as well as for various top scholarly publications.

Praise for Heather Ann Thompson’s Blood in the Water

“Gripping . . . Not all works of history have something to say so directly to the present, but Heather Ann Thompson’s Blood in the Water: The Attica Prison Uprising of 1971 and Its Legacy, which deals with racial conflict, mass incarceration, police brutality and dissembling politicians, reads like it was special-ordered for the sweltering summer of 2016. But there’s nothing partisan or argumentative about Blood in the Water. The power of this superb work of history comes from its methodical mastery of interviews, transcripts, police reports and other documents, covering 35 years, many released only reluctantly by government agencies . . . It’s Ms. Thompson’s achievement, in this remarkable book, to make us understand why this one group of prisoners [rebelled], and how many others shared the cost.” —Mark Oppenheimer, The New York Times

“Chilling, and in places downright shocking . . . [Thompson] tells the story of the riot and its aftermath with precision and momentum.” —Bryan Burrough, The Wall Street Journal

“A masterly account . . . Essential . . . Blood in the Water restores [the prisoners’] struggle to its rightful place in our collective memory.” —James Forman Jr., The New York Times Book Review

“A long, memorable chronicle . . . dense with new information . . . Thompson’s capacity for close observation and her honesty [are] impressive.” —Adam Gopnik, The New Yorker

“Thompson’s book is a masterpiece of historical research; it is thoroughly researched, extensively documented and reads like a novel . . . Magnificent.” —Terry Hartle, The Christian Science Monitor

“Heather Ann Thompson tracked down long-hidden files related to the tragedy at Attica—some of which have since disappeared—to tell the saga in its full horror.” —Larry Getlen, New York Post

“Writing with cinematic clarity from meticulously sourced material, [Thompson] brilliantly exposes the realities of the Attica prison uprising . . . Thompson’s superb and thorough study serves as a powerful tale of the search for justice in the face of the abuses of institutional power.” —Publishers Weekly Review of the Day (starred review)

“[A] real eye-opener for readers whose interest in Attica and knowledge of what happened ended when the headlines receded . . . Compelling . . . Sensitive . . . Impressively authoritative and thoughtfully composed.” —Kirkus Reviews (starred review)

“Blood in the Water is extraordinary—a true gift to the written history of civil rights and racial justice struggles in America.” —Michelle Alexander, author of The New Jim Crow: Mass Incarceration in the Age of Colorblindness

“Remarkable. Blood in the Water is a historical tour de force. It sheds new light on these most important historical events, events that in part triggered the wave of exponential prison growth today. For those of us who have been tracing the rise of mass incarceration in this country, Heather Ann Thompson’s book is a must read.” —Bernard E. Harcourt, Professor of Law and Political Science at Columbia University

“Heather Ann Thompson wields the powers of the historian with mesmerizing force. Forty-five years after the Attica uprising, Blood in the Water offers the most complete history to date on that tragic episode and does so with unflinching purpose: a clearer view of the consequences for human life, both past and present.” —Glenn E. Martin, Founder and President of JustLeadershipUSA

“Blood in the Water tells of warning signs in 1971 that still exist more than forty years later. Heather Ann Thompson’s prophetic analysis is a sobering reminder that we must all care about what is happening to human beings behind prison walls.” —Soffiyah Elijah, Executive Director of the Correctional Association of New York