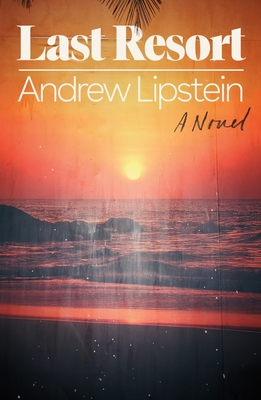 An outrageous plot too good to be taken anything less than seriously: a listless but talented writer steals the idea for his debut novel from a former acquaintance, and an unbelievable deal is made to cover up the scandal that ensues. A novel about literary success and moral conundrums (and love, and relationships, and author readings at bookstores) as sharp as winter wind in Lipstein's top notch prose. You'll put this book down both shocked and fulfilled.

In his blazing debut novel, Andrew Lipstein blurs the lines of fact and fiction with a thrilling story of fame, fortune, and impossible choices.

Caleb Horowitz is twenty-seven, and his wildest dreams are about to come true. His manuscript has caught the attention of the agent, who offers him money, acclaim, and a taste of the literary life. He can’t wait for his book to be shopped to every editor in New York, except one: Avi Deitsch, an old college rival and the novel’s “inspiration.” When Avi gets his hands on it, he sees nothing but theft—and opportunity. Caleb is forced to make a Faustian bargain, one that tests his theories of success, ambition, and the limits of art.

Last Resort is the razor-edged account of a young man’s reckless journey into authenticity. As Caleb fights to right his mistakes and reclaim his name, he must burn every bridge, confront his deepest desires, and finally see his work from the perspectives of characters he’d imagined were his own.

Andrew Lipstein lives in Brooklyn, New York, with his wife, Mette, and son, August. He is the author of Last Resort.

“There aren’t enough shady adjectives in the dictionary to describe the narrator of Andrew Lipstein’s Last Resort. What fun! . . . [An] anti-Künstlerroman . . . not about the formation of genuine artists but about the self-destruction of phony ones . . . [Last Resort] could mark the advent of a whole genre that allegorizes the professional writer’s suspicion that he might be a scammer.” — Molly Young, The New York Times

“Splayed across these pages is the dark terror that lurks within any creative person’s breast . . . As Lipstein skewers the pretensions and delusions of literary ambition, he reveals the mental tricks that allow writers to imagine that they care only for art, not money or fame . . . [A] deliciously absurd comedy about literary fame." — Ron Charles, The Washington Post

"Last Resort, Andrew Lipstein’s almost perfectly plotted debut novel on a topic — creative envy and artistic theft — that tastes like catnip to many readers of literary fiction . . . has one of the best endings in recent memory . . . . You’ll think about [Last Resort] for weeks after you read the last pages." — Nathan Deuel, The Los Angeles Times

"Lipstein gleefully scrutinizes the nature of success in an industry that runs as much on vanity as on financial gain. The book’s command of contemporary-hipster details is wincingly precise." —The New Yorker

"This smart and mean little novel [gives] a delectable twist to the deathless question of who owns a story . . . I couldn't stop reading it, and felt absolutely grubby afterwards—what a joy." — Dan Kois, Slate

"[Last Resort’s] Caleb finds himself in a slow-motion literary-world car crash . . . so horribly delicious that the reader (especially the reader who is also a writer) won’t even dream of looking away.” — Emily Temple, Literary Hub (Most Anticipated Books of 2022)

“You won’t read a more brilliantly executed literary romp this year . . . An unsparing satire of a generation of millennials who fear that their lives lack gravitas and emotional depth” — Matt Rowland Hill, The Guardian

“Luminous . . . tantalizing . . . to be applauded for its frank depiction of the tussle between art and commerce.” — George Cochrane, The Times Literary Supplement

“Talent is rare, which is why I let out a big yippee reading Andrew Lipstein’s Last Resort . . . Lipstein doesn’t just blast chunks out of the inflated artifice of New York’s literary scene, he turns his fire on the city at large too.” — Ethan Croft, The Times (UK)

“As funny and fast-paced as it is sharp and cutting.” — Monocle

"If there's nothing new under the sun, can anyone be original without lying? Would truth still be stranger than fiction if people were honest in real life? This fast-paced simulacrum of a commercial novel is not out to please the critics. I finished it in a day." — Nell Zink, author of Doxology

"Lipstein wittily captures all the savagery of the publishing industry, from Goodreads reviews to awkward author photos. But for all the metafictional layers here, at its heart [Last Resort] is a surprisingly traditional, almost Dickensian, story about the vagaries of fate. For anyone who can’t look away from a juicy literary scandal." — Kirkus Reviews

"Last Resort is a rare accomplishment, a novel of ideas—about art, authorship, money, ethics—with the momentum of a great thriller." — Rumaan Alam, author of Leave the World Behind

"Last Resort is a witty, propulsive and often mesmerizing novel, a kind of creative-class thriller, full of wry social observation and subtle emotional textures, and it builds beautifully toward a bracing showdown between knowingness and self-knowledge. With its insular milieu and quality lit namechecks, not to mention its quasi-satirical anxiety of auto-fictional influence, Andrew Lipstein plays a risky game, and he plays it superbly, with feeling." — Sam Lipsyte, author of Hark

"A brilliant take on what it means to be an artist in a world of endless compromises. Look out, Faust, there's a new sheriff in town." — Gary Shteyngart, author of Lake Success

“Last Resort is a strange and beguiling book about the contrivances, connivances and mysteries of creation, with an especially visceral depiction of male anxiety and an absolutely blistering end. A terrific debut.” — Joshua Ferris, author of A Calling for Charlie Barnes

"Lipstein asks the timely question: does one possess sole title to one’s own story? A sharply written, headlong romp." — Lionel Shriver, author of Should We Stay or Should We Go

"With its seductive, chilled intelligence and frictionless style, Last Resort plunged me summarily into a one-sitting read. I came up for air awed by this sophisticated, high-stakes moral drama." — Hermione Hoby, author of Virtue

“If Less by Andrew Sean Greer left a hole in your life, good news: Last Resort will fill it. Fast and funny, it feels like a backstage pass to the book world.” — Meg Mason, author of Sorrow and Bliss

"Last Resort raises incisive questions about authorship, the tension between art and commerce, and the elusive nature of self-fulfillment, all while unspooling a compelling story with humor and great suspense. I didn't want it to end." — Julia Pierpont, author of Among the Ten Thousand Things

“A blissfully wicked work of art . . . a lightning-streak of a novel.” — Christopher Bollen, Interview

"Last Resort is witty, profound and blisteringly intelligent. Andrew Lipstein asks major questions about ambition and authenticity and artistic ethics, while keeping me frantically turning the pages to see what happens next. A fantastic, fast-paced and deeply funny novel." — Molly Antopol, author of The UnAmericans

“Authenticity and possession of stories are the surface themes of Last Resort, but it is really about ambition and emptiness, about a callow young man with nothing to say self-destructively looking for shortcuts in literature and life. But the great irony is that Andrew Lipstein's impeccably written debut has quite a lot to say, and, as with the best comic novels, his semi-hero's misadventures have an undertow of real sadness.” — Teddy Wayne, author of Loner

"A delightfully nightmarish satirical chronicle of one young author’s reckoning with the consequences of his own blind ambition. Caleb’s journey had me cringing with pure pleasure.” — Antoine Wilson, author of Panorama City

"A propulsive tale of American literary ambition, this novel exposes the status-hunger that motivates plenty of writing—far more than writers like to admit. A keenly observed and sharp-witted debut that’s assured from first page to last." — Tom Rachman, author of The Italian Teacher