She Sang for India: How M.S. Subbulakshmi Used Her Voice for Change (Hardcover) 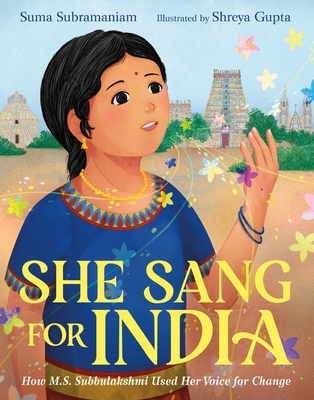 A picture book biography about M.S. Subbulakshmi, a powerful Indian singer who advocated for justice and peace through song.

Before M.S. Subbulakshmi was a famous Carnatic singer and the first Indian woman to perform at the United Nations, she was a young girl with a prodigious voice.

But Subbulakshmi was not free to sing everywhere. In early 1900s India, girls were not allowed to perform for the public. So Subbulakshmi busted barriers to sing at small festivals. Eventually, she broke tradition to record her first album. She did not stop here. At Gandhi's request, Subbulakshmi sang for India’s freedom. Her fascinating odyssey stretched across borders, and soon she was no longer just a young prodigy. She was a woman who changed the world.

Suma Subramaniam is an Indian American author and volunteer for We Need Diverse Books. She is a contributing author for The Hero Next Door (Penguin Random House) and the author of Namaste Is A Greeting (Candlewick). She has an MFA in Writing from Vermont College Of Fine Arts. She Sang For India is her nonfiction picture book debut.

Shreya Gupta is an illustrator and book designer. She is originally from India, but her passion for illustration brought her to the United States, where she pursued an MFA in Illustration as Visual Essay from the School of Visual Arts. Her work has been featured as a “Google Doodle” logo, in the New York Times, Asia Society magazine and in various major publications. She currently lives in New York, NY.