The Owl Who Liked Sitting on Caesar: Living with a Tawny Owl (Hardcover) 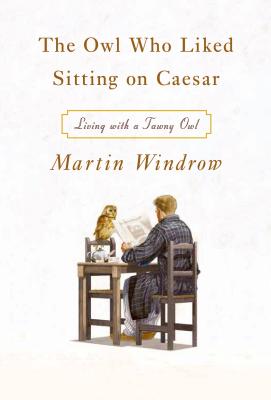 By Martin Windrow
Unavailable at this time.
Out of print

Martin Windrow was a war historian with little experience with pets when he adopted an owl the size of a corncob. Adorable but with knife-sharp talons, Mumble became Windrow's closest, if at times unpredictable, companion, first in a South London flat and later in the more owl-friendly Sussex countryside. In The Owl Who Liked Sitting on Caesar, Windrow recalls with wry humor their finer moments as well as the reactions of incredulous neighbors, the awkwardness of buying Mumble unskinned rabbit at Harrods Food Hall, and the grievous sense of loss when Mumble nearly escapes.
As Windrow writes: "Mumble was so much a part of my life in those days that the oddity of our relationship seldom occurred to me, and I only thought about it when faced with other people's astonishment. When new acquaintances learned that they were talking to a book editor who shared a seventh-floor flat in a South London tower block with a Tawny Owl, some tended to edge away, rather thoughtfully . . . I tried to answer patiently, but I found it hard to come up with a short reply to the direct question 'Yes, but . . . why?'; my best answer was simply 'Why not?'"
Windrow offers a poignant and unforgettable reminiscence of his charmed years with his improbable pet, as well as an unexpected education in the paleontology, zoology, and sociology of owls.

Martin Windrow is an English military historian and a long-time commissioning and art editor for Osprey Publishing. He is the author of numerous books of military history, including The Last Valley, a distinguished history of the French defeat in Vietnam. He lives in the Sussex Downs country of southern England.

“Anyone who thinks the bond between man and dog or cat is the supreme human-house pet attachment will have to reconsider after reading Martin Windrow's touching account of the bird who changed his life, a possessive and characterful tawny owl named Mumble who was his domestic companion for 15 action-packed years . . . [The Owl Who Liked Sitting on Caesar is] a memoir of his friendship with this singular creature, interwoven with a natural history of her species and a close, not to say obsessive, description of her traits . . . [It] is all the more affecting because of its gruff understatement.” —Liesl Schillinger, The New York Times Book Review

“Charming . . . an eloquent yet unsentimental testimonial about a man devoted to his "one true owl", and the profound impact that relationship with this bird had on his life.” —The Guardian

“Unlikely books are often very endearing--this is one such book. An utterly charming work, perhaps best read at night when there are owls about.” —Alexander McCall Smith, author of the No. 1 Ladies' Detective Agency series

“The Owl Who Liked Sitting on Caesar is pure joy. Martin Windrow shows us the essence of a wild animal in a story as informative as a scientific paper on the species Strix aluco, but much more fun to read. Owls are among the world's most interesting creatures, and to see one up close and in detail as we do here is a valuable experience that will appeal to readers of every kind.” —Elizabeth Marshall Thomas, author of A Million Years with You: A Memoir of Life Observed

“With a keen eye for the telling detail, Windrow has written an informative, tender and, yes, wise memoir on the blessed ties that bind people and their pets--one that should find a permanent perch on your shelf.” —Jay Strafford, Richmond Times-Dispatch

“Funny, touching and divertingly novel . . . [Windrow] has produced an homage to both a creature and its species that is almost Leonardo-like in its precision and spirit of curiosity. The result is nothing less than a small masterpiece of animal literature . . . [A] perfect book.” —Ben Downing, The Wall Street Journal