Magic: A History: From Alchemy to Witchcraft, from the Ice Age to the Present (Hardcover) 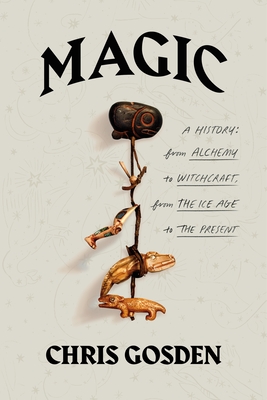 By Chris Gosden
$30.00
On our shelves now at one or more of our stores

Three great strands of belief run through human history: Religion is the relationship with one god or many gods, masters of our lives and destinies. Science distances us from the world, turning us into observers and collectors of knowledge. And magic is direct human participation in the universe: we have influence on the world around us, and the world has influence on us.

Over the last few centuries, magic has developed a bad reputation—thanks to the unsavory tactics of shady practitioners, and to a successful propaganda campaign on the part of religion and science, which denigrated magic as backward, irrational, and "primitive." In Magic, however, the Oxford professor of archaeology Chris Gosden restores magic to its essential place in the history of the world—revealing it to be an enduring element of human behavior that plays an important role for individuals and cultures. From the curses and charms of ancient Greek, Roman, and Jewish magic, to the shamanistic traditions of Eurasia, indigenous America, and Africa; from the alchemy of the Renaissance to the condemnation of magic in the colonial period and the mysteries of modern quantum physics—Gosden's startling, fun, and colorful history supplies a missing chapter of the story of our civilization.

Drawing on decades of research around the world—touching on the first known horoscope, a statue ordered into exile, and the mystical power of tattoos—Gosden shows what magic can offer us today, and how we might use it to rethink our relationship with the world. Magic is an original, singular, and sweeping work of scholarship, and its revelations will leave a spell on the reader.

Chris Gosden is a professor of European archaeology at the University of Oxford. Previously he was a curator and lecturer at the Pitt Rivers Museum, Oxford, where he encountered many magical objects displayed in a scientific manner. Gosden is a Fellow of the British Academy and the Society of Antiquaries.

Longlisted for the Non-Obvious Book Award

“Eye-opening . . . Gosden persuasively argues that just because something is scientifically questionable does not mean it is not magically successful. If a magical ritual can imbue in us an understanding and sensitivity to the world around us, has it failed? Indeed, what could be better suited to affecting change in our age of ecological devastation than a philosophy that forces us to see the world as an extension of ourselves?” —George Pendle, Air Mail

"Enlightening . . . Gosden persuasively argues that magic, religion, and science have always existed in tandem, forming a 'triple helix' of understanding running through the course of human history up to the present day. In light of the current climate crisis, and inspired by the discoveries of quantum physics, Gosden furthermore makes a compelling case for a return to the kind of interconnected perspective central to most magical traditions . . . A fascinating exploration of magic’s hold on the human imagination." —Sara Shreve, Library Journal (starred review)

“Vast and transformational . . . We need, Gosden argues with the wisdom of a sage on a mountain-top, a ‘new magic’ for the 21st century in order to deal with the calamity of climate change.” —Frances Wilson, The Daily Mail (UK)

“[Magic] is erudite, accessible and expansive . . . Without an unfascinating page . . . [A] remarkable and endlessly interesting volume.” —Stuart Kelly, The Scotsman (UK)

"Fascinating, original and excellent, written with both narrative flair and deep scholarship, this is a world history, from the steppes of Mongolia to the palaces of London and Paris from prehistory to today, told through the lens of magic, that has always existed alongside and within religion itself, a gripping ride of astonishing span, filled with colorful characters, shamans, witches and kings, esoteric rites and revelatory research. An important and essential read that also happens to be a highly entertaining historical treasure-trove." —Simon Sebag Montefiore, author of The Romanovs: 1613–1918

"Impressive and much-needed. Gosden masterfully presents the history of magic from a global perspective, enabling the reader to make fascinating connections between traditions in different places and eras." —Violet Moller, author of The Map of Knowledge: A Thousand-Year History of How Classical Ideas Were Lost and Found

"'To be human is to be connected.' Chris Gosden shows how magic explores the connections between human beings and the universe in ways different from religion or science, yet deserving of respect. A magisterial account of the central place of magic in many cultures both ancient and modern." —John Barton, author of A History of The Bible: The Book and Its Faiths

"With his own magic touch, Chris Gosden brilliantly reveals the place of magic in human societies from the Ice Age to the present day in all inhabited continents, and shows how the exercise of magic was an everyday practice that joined the world of the dead to that of the living." —David Abulafia, author of The Boundless Sea: A Human History of the Oceans

"This is an extraordinary work of learning, written with an exhilarating lightness of touch. And it’s flexible: you can read it from cover-to-cover, or just dip in—or both. Chris Gosden has traced the story of magical beliefs from the Old Stone Age to modern times, across all the continents of the world. But it isn’t just a work of archaeology and history: it has increasing relevance for our own times, as we witness the growth of extreme cults and the seditious myths of the post-truth era. It is essential reading." —Francis Pryor, author of Britain B.C.

“Chris Gosden’s Magic is a major contribution to an important but neglected subject. It should be read not only by archaeologists and anthropologists but by everyone interested in the human condition." —Barry Cunliffe, author of Europe Between the Oceans: 9000 B.C. to A.D. 1000