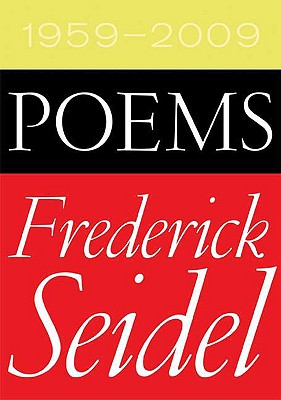 These are the collected poems of a master whose work includes many of the most compelling, savage, and tender poems in the language. Frederick Seidel is, in the words of the critic Adam Kirsch, “the best American poet writing today.”

“The most frightening American poet ever—phallus-man, hangman of political barbarism—Seidel is the poet the twentieth century deserved.”—Calvin Bedient, Boston Review

“He radiates heat. It is apparent that he has asked himself frightful questions and has not dodged the implications of their equally frightful answers . . . A master of metaphor.”—Louise Bogan, The New Yorker

“The best verse out of the United States since whenever.”—Joe Fiorito, The Toronto Star

“Among the two or three finest poets writing in English.”—Alex Halberstadt, New York

“[Final Solutions] seems to me one of the most moving and powerful books of poetry to have come along in years.”—Anthony Hecht, The New York Review of Books

“[Life on Earth] is an exemplary book . . . One of the best by an American poet in the past twenty years.”—Michael Hofmann, The Times Literary Supplement

“One of the world’s most inspired and unusual poets . . . His poems are a triumph of cosmic awe in the face of earthly terror.” —Hillel Italie, USA Today

“In American poetry today there is no one with Frederick Seidel’s sheer ambition, comprehensive sense of our times, sophistication, nerve and skill . . . One of the most vital and important poets we have.”—Lawrence Joseph, The Nation

“The excellent table manners combined with a savage display of appetite: this is what everyone notices in Seidel. Yet he wouldn’t be so special or powerful a poet of what’s cruel, corrupt, and horrifying had he not also lately shown himself to be a great poet of innocence.”—Benjamin Kunkel, Harper’s Magazine

“In the desert of contemporary American poetry, Frederick Seidel’s work awaits the weary reader like an oasis.”—James Lasdun, The Guardian

“Frederick Seidel is a ghoul, and he has produced this nascent century's finest collection of English poems.”—Michael Robbins, Chicago Review

"Frederick Seidel, for fifty years and across ten collections, has been writing our most serious, beautiful, and essential poems, poems that are shocking in their art and astonishing in their truth, and that remind us, in their forms, why poetry was once a vital part of cultural life"—Wyatt Mason, Harper's "Weekend Read"