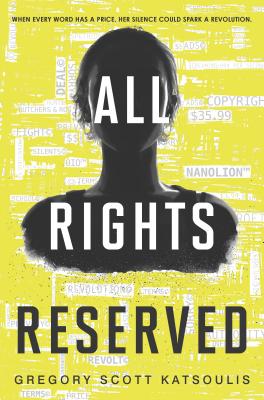 By Gregory Scott Katsoulis
$18.99
Unavailable at this time.

This is book number 1 in the Word$ series.

“All Rights Reserved is a dystopian future tale like I’ve never read before, especially chilling in its plausibility. Speth Jime lives in a society where every word and gesture has been copyrighted. On a person’s 15th birthday, a cuff is installed on their wrist to monitor them so they can be charged accordingly for every word they use and gesture they make. But Speth has found a loophole—if she never speaks (or makes a trademarked gesture) again, she doesn’t have to play by the rules of this oppressive system. She never meant to be an activist, but her defiant action just might lead to revolution.”
— Tia Heywood, Babbling Book & The Dragon's Nook, Haines, AK

In a world where every word and gesture is copyrighted, patented or trademarked, one girl elects to remain silent rather than pay to speak, and her defiant and unexpected silence threatens to unravel the very fabric of society. Speth Jime is anxious to deliver her Last Day speech and celebrate her transition into adulthood. The moment she turns fifteen, Speth must pay for every word she speaks ("Sorry" is a flat ten dollars and a legal admission of guilt), for every nod ($0.99/sec), for every scream ($0.99/sec) and even every gesture of affection. She's been raised to know the consequences of falling into debt, and can't begin to imagine the pain of having her eyes shocked for speaking words that she's unable to afford. But when Speth's friend Beecher commits suicide rather than work off his family's crippling debt, she can't express her shock and dismay without breaking her Last Day contract and sending her family into Collection. Backed into a corner, Speth finds a loophole: rather than read her speech--rather than say anything at all--she closes her mouth and vows never to speak again. Speth's unexpected defiance of tradition sparks a media frenzy, inspiring others to follow in her footsteps, and threatens to destroy her, her family and the entire city around them.