A Backpack, a Bear, and Eight Crates of Vodka: A Memoir (Paperback) 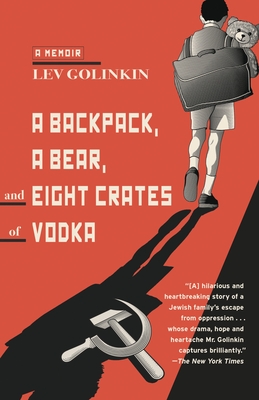 It's 1988. The border closes on December 31st. Your parents decide to leave the U.S.S.R. What do you take? My favorite memoir of 2014. Take up and read Golinkin as he retells the story of his abrupt exit from the Soviet Union, his time in the refugee camps, and his attempts to forget his past.

"[A] hilarious and heartbreaking story of a Jewish family’s escape from oppression."--The New York Times

A compelling story of two intertwined journeys: a Jewish refugee family fleeing persecution and a young man seeking to reclaim a shattered past. In the twilight of the Cold War (the late 1980s), nine-year old Lev Golinkin and his family cross the Soviet border with only ten suitcases, $600, and the vague promise of help awaiting in Vienna. Years later, Lev, now an American adult, sets out to retrace his family's long trek, locate the strangers who fought for his freedom, and in the process, gain a future by understanding his past.

Lev Golinkin's memoir is the vivid, darkly comic, and poignant story of a young boy in the confusing and often chilling final decade of the Soviet Union. It's also the story of Lev Golinkin, the American man who finally confronts his buried past by returning to Austria and Eastern Europe to track down the strangers who made his escape possible . . . and say thank you. Written with biting, acerbic wit and emotional honesty in the vein of Gary Shteyngart, Jonathan Safran Foer, and David Bezmozgis, Golinkin's search for personal identity set against the relentless currents of history is more than a memoir—it's a portrait of a lost era. This is a thrilling tale of escape and survival, a deeply personal look at the life of a Jewish child caught in the last gasp of the Soviet Union, and a provocative investigation into the power of hatred and the search for belonging. Lev Golinkin achieves an amazing feat—and it marks the debut of a fiercely intelligent, defiant, and unforgettable new voice.

Lev Golinkin is the author of A Backpack, a Bear, and Eight Crates of Vodka.  Mr. Golinkin, a graduate of Boston College, came to the US as a child refugee from the eastern Ukrainian city of Kharkov (now called Kharkiv) in 1990.  His op-eds and essays on the Ukraine crisis have appeared in The New York Times, Los Angeles Times, The Boston Globe, and Time.com, among others; he has been interviewed by WSJ Live and HuffPost Live.

"Golinkin's memoir is a look into life during the Cold War, as well as a coming-of-age-story about finding yourself and where you belong. And reading the harrowing details of his family's exodus will have you counting your own blessings—and hugging the people you love."
--Glamour.com

"Mr. Golinkin excels at these moments, describing the emotional truth of immigration... His account is so raw that it manages to capture at a visceral level the feelings of many of the million Soviet Jews who left their homeland at the Cold War’s end."
--The Wall Street Journal

"[Lev Golinkin] convincingly relates the purgatory of statelessness, the confused anticipatory state of the immigrant."
--The Chicago Tribune

"Best memoir title of the year...Golinkin's A Backpack, a Bear, and Eight Crates of Vodka is fueled not by sly humor but by a potent cocktail of earnestness and anger."
--The Oregonian

"Outstanding, original, and deeply moving."
--Chuck Hogan, bestselling author of The Town and co-author of The Strain

"As the author turned nine during the Soviet Union’s final years, his Jewish family fled hostile Kharkov, in Ukraine, with virtually no possessions and made their way through central Europe to the U.S. After college, he retracted their steps, thanking the NGO workers and patrons who’d helped them – including the son of an unrepentant Nazi Austrian baron. Golinkin’s account of the whole saga is lucidly intelligent and humanistic – and deeply moving."
--ELLE (The Elle's Lettres 2015 Readers' Prize)

"Thirty years after the end of the Cold War, there is a vibrant literary canon written by former Soviet Jews who have come of age in America. Gary Shteyngart may be the group’s founding father; Anya Ulinich, its graphic novelist; Yelena Akhtiorskaya, its newest ingenue. Mr. Golinkin, with this deeply personal and sometimes painful dissection of the split identity of an emigre, has grabbed the role of psychotherapist."
--Pittsburgh Post-Gazette

"Despite the serious topic, Golinkin writes with a light touch; he has a natural sense of humor and an easy style...[A Backpack, a Bear, and] Eight Crates of Vodka opens with a depiction of breathtaking cruelty. But by the end, readers may feel breathless at the incredible kindness of strangers."
--Minneapolis Star Tribune

“There’s a gem on every page of A Backpack, A Bear, and Eight Crates of Vodka. Lev Golinkin has the skill and vision necessary to tell the story of a crumbling empire, and the soulfulness and flair to capture that story in the saga of one man. He’s an alert, and witty, and humane storyteller. I will eagerly read anything he writes.”
--Avi Steinberg, author of Running the Books and The Lost Book of Mormon

"Golinkin came to America as a Ukrainian child refugee with only what he and his family could carry. But he's found his family fortune in their exodus story--a soulful tale that is both incredibly beautiful and wickedly funny, a tale of being lost, being found and finding home."
--Helene Stapinski, author of Five-Finger Discount: A Crooked Family History

"An unforgettable coming-of-age memoir of a boy from Soviet Ukraine that entertains as it conveys insight into the meaning of America in today's turbulent world."
--Jack F. Matlock, Jr., former ambassador to the Soviet Union under Reagan and George H.W. Bush, and author of Reagan and Gorbachev and Autopsy on an Empire

"In Lev Golinkin’s skillful memoir, A Backpack, a Bear, and Eight Crates of Vodka, we share his family’s traumatic flight to freedom from Soviet Ukraine, and then a young man’s brave attempt to build a meaningful life in the United States."
--Peter Eisner, author of The Pope’s Last Crusade

"[Lev] Golinkin's personal tale of childhood in the Ukraine has the specificity of his own story at its heart, and becomes more than just a woeful yarn about repression in the Soviet Bloc. It can be heartbreaking, but in unexpected and nuanced ways...When he catches up with the present, the narrative fractures, skipping between his return voyage to the Ukraine to answer his own questions about leaving and accounts of his family's early experiences in their new country. All these strains are working at once in the story, as they are in his mind, as he digs up repressed memories and reassembles fragmented ones. Golinkin's memoir travels along at a confident clip, giving readers not just an immigrant story, but also a detailed look at how the mind wraps itself around a complicated life."
--Biographile.com

"Golinkin writes with dry humor about his experience but connects emotionally...A Backpack, a Bear, and Eight Crates of Vodka blends memoir and history into an intimate tale of personal growth."
--BookPage

“Golinkin convincingly portrays the miseries, and rare joys, of his bullied, furtive childhood, and the limits it put on him….[He] has created a deeply moving account of fear and hope.”
--Publishers Weekly

"An ex-Iron Curtain refugee-turned-American citizen tells the emotional story of how he and his parents fled the Ukraine two years before the collapse of the Soviet Union...Unflinching honesty. A mordantly affecting chronicle of a journey to discover that 'you can't have a future if you don't have a past.'"
--Kirkus Reviews

"Golinkin’s early memories are touchingly true to those of a youngster, and he reports on his family members’ fears, troubles, persistence, and patience with a keen eye and a memorable voice...Eye-opening for those who come to the U.S. and for those who help them do so."
--Booklist