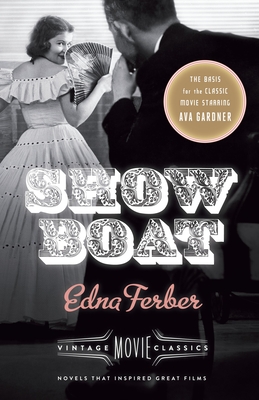 Bringing to life the adventurous world of Mississippi show boats, the grittiness of turn-of-the-century Chicago, and the majesty of 1920s Broadway, Pulitzer Prize winner Edna Ferber’s Show Boat is a classic. Magnolia Hawks spends her childhood aboard the Cotton Blossom, growing up amid simmering racial tension and struggling to survive life on the Mississippi. When she falls in love with the dashing Gaylord Ravenal and moves with him to Chicago, the joy of giving birth to their beautiful daughter, Kim, is offset by Gaylord’s gambling addiction and distrustful ways. Only when Kim sets off on her own to pursue success on the New York stage does Magnolia return to the Cotton Blossom, reflecting on her own life and all who once called the show boat their home.

Originally published in 1926, adapted for the stage as a musical a year later and filmed three times over three decades, Show Boat brilliantly explores a nation going pivotal change through the lens of its popular culture.

With a new foreword by Foster Hirsch.

Vintage Movie Classics spotlights classic films that have stood the test of time, now rediscovered through the publication of the novels on which they were based.

Edna Ferber was an American novelist, short story writer and playwright. Her bestselling novels were especially popular and included the Pulitzer Prize-winning So Big, Show Boat, Giant, and Cimarron. She died in 1968.

“An irresistible story. . . . Gorgeously romantic. . . . Spirited, full-breasted, tireless. . . . With Show Boat Miss Ferber establishes herself . . . as one of those who are reviving first-rate story-telling.”
—The New York Times

“No one tells so well as Edna Ferber the story of the American people in their various backgrounds. . . . It is a gift, a lovely gift, and no one uses her talents more delightfully than Edna Ferber.”
—William Allen White