All the Birds, Singing: A Novel (Paperback) 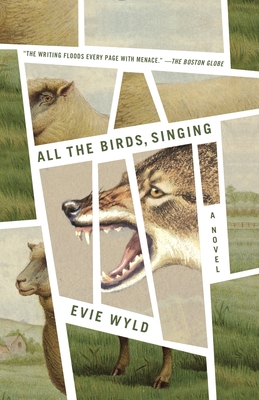 If you're looking for a tidy little book, a book that ties up all its loose ends, fits all the puzzle pieces together, resolves every mysterious plot line... this is not the book for you. But who wants that anyway? Life isn't tidy, so this just feels more real.

All the Birds, Singing is crammed full of hidden pasts, unraveling lives, and mysterious strangers. A bleak and wind-whipped British island is home to Jake Whyte, a solitary woman who raises sheep and keeps the locals as far away as she can. She's hiding something, and now her sheep are being hunted and mutilated, and Jake might be next.

What makes this book impossible to put down is the unique structure Evie Wyld employs. In alternating chapters, between the the eerie present day mystery, she tells the story of Jake's secret past in the burning isolation of rural Australia. But these flashbacks run backwards in time, bringing the reader ever closer to the tragic secret that sets Jake's life spiraling out of her control.

This is a dark but beautiful book that I just couldn't stop reading. Even weeks after finishing it, it's lingering on my mind. Plus, I really love a book title with punctuation in it.

This book is textured by the same kind of desperate, isolated atmosphere that you find in movies like "The Proposition" by Nick Cave or in paintings like "Christina's World" by Andrew Wyeth. Throughout all there runs a deep vein of understated, abject horror. In empathizing with the characters I found myself alternating between feeling unclean, and fearsome.

From one of Granta’s Best Young British Novelists, an emotionally powerful, award-winning novel about an outsider haunted by an inescapable past.

Jake Whyte has retreated to a remote farmhouse on a craggy British island, a place of ceaseless rains and battering winds, with only her collie and a flock of sheep as companions. But something—or someone—has begun picking off her sheep one by one. There are foxes in the woods, a strange man wandering the island, and rumors of a mysterious beast prowling at night. And there is Jake’s relentless past—one she tried to escape thousands of miles away and years ago, concealed in stubborn silence and isolation and the scars that stripe her back. With exceptional artistry, All the Birds, Singing plumbs a life of fierce struggle and survival, sounding depths of unexpected beauty and hard-won redemption.

EVIE WYLD grew up in Australia and London, where she currently resides. Her first novel, After the Fire, a Still Small Voice, won the John Llewellyn Rhys Prize and a Betty Trask Award, and All the Birds, Singing won the Miles Franklin Literary Award and the Encore Award for Best Second Novel. Wyld has also been short-listed for the Orange Award for New Writers, the International IMPAC Dublin Literary Award, the Commonwealth Writers Prize, the James Tait Black Prize, and the Costa Novel Award, and long-listed for the Baileys Women’s Prize for Fiction.

“Daring and fierce. . . . From the very first sentence of Wyld’s brilliantly unsettling novel, you’re thrust into a world of violence, dread, and psychological mystery. . . . The writing flood[s] every page with menace.” —The Boston Globe

“Swift and assured and emotionally wrenching. You won’t only root for Jake, you’ll see the world, hard facts and all, more clearly through her telling.” —The New York Times Book Review

“Broodingly lyrical. . . . Casts a spellbinding breadcrumb trail back in time to reveal the origins of Jake’s banishment—and the darker mysteries of human nature.” —Vogue

“Purely gorgeous. . . . Wyld ramps up the tension. . . . There’s love as well as dread in this book, a surprising sort of love—the best kind of all.” —The Washington Post

“Gloriously gruesome [and] lushly visceral. . . . To say that Wyld’s writing makes the art of sheep shearing come alive for the reader may not sound like a particular compliment, but oh, it is—she makes it sing with flea-coated, dung-crusted eloquence. . . . Half of you wants to race through to find out what happens, half wants to pause over the dark, clotted sentences. And then the state of suspense becomes almost unbearable. . . . The final revelation, when it comes, is explosive.” —NPR.org

“Dark and wickedly captivating. . . . It’s nearly impossible not to get swept up in the game of merging the two stories by piecing together each clue Wyld keeps stashed away to reveal at the most opportune moment. . . . Think Room or Winter’s Bone-style creepy. . . . A gripping novel.” —San Francisco Chronicle

“A suspenseful and melancholy novel. . . . Wyld [demonstrates] masterful control. There are also surprising moments of lightness—the protagonist’s dark humor, the author’s unsentimental reverence for the natural world.” —The New Yorker

“Utterly gripping. . . . The book has the brisk pacing of a well-thumbed pocket paperback found in a summer cottage, and yet it’s the sort of book that gets listed as a best book of the year. . . . The mystery of what’s going on with the sheep in All the Birds, Singing, were it the book’s only subject, would make for a fun read on its own. But the sheep are only the beginning.” —Salon

“An atmosphere pungent with menace and panicked uncertainty. . . . Wyld teasingly leads readers to the mysterious incident Jake is trying to escape . . . Wyld keeps her readers in a blinkered state and then spooks them.” —The Wall Street Journal

“Tantalizes. . . . The prose maintains a fine-tuned ominous mood. . . . The most impressive aspect of the novel is its structure.” —The New York Times

“Wyld displays a fierce command of language. . . . She tackles a variety of difficult themes—memory and trauma chief among them—with considerable care.” —The Daily Beast

“Outstanding . . . Evie Wyld is the real thing . . . She reconfigures the conventions of storytelling with a sure-footedness and ambition which belie her age . . . Quite as good as Ian McEwan’s early fiction.” —The Spectator

“Extraordinarily accomplished, one of those books that tears around in your cerebellum like a dark firework, and which, upon finishing, you immediately want to pick up again.” —Financial Times

“An intensely involving tale of survival, shot through with Wyld’s distinctive wit . . . An indelible and atmospheric novel that will have the hairs on the back of your neck working overtime.” —Daily Mail

“For once, the hype matches the talent . . . Wyld’s writing seems to come from somewhere deep, somewhere a little bit unnerving.” —The Sunday Times (London)

“Vividly drawn . . . When the birds do ‘sing,’ and Jake’s primal tragedy is revealed, it is clever and very unexpected indeed.” —The Guardian