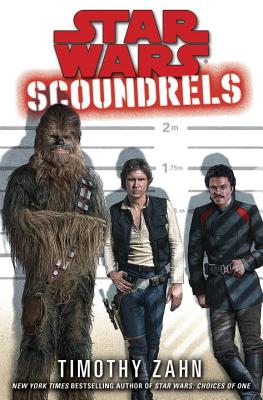 To make his biggest score, Han’s ready to take even bigger risks.
But even he can’t do this job solo.

Han Solo should be basking in his moment of glory. After all, the cocky smuggler and captain of the Millennium Falcon just played a key role in the daring raid that destroyed the Death Star and landed the first serious blow to the Empire in its war against the Rebel Alliance. But after losing the reward his heroics earned him, Han’s got nothing to celebrate. Especially since he’s deep in debt to the ruthless crime lord Jabba the Hutt. There’s a bounty on Han’s head—and if he can’t cough up the credits, he’ll surely pay with his hide. The only thing that can save him is a king’s ransom. Or maybe a gangster’s fortune? That’s what a mysterious stranger is offering in exchange for Han’s less-than-legal help with a riskier-than-usual caper. The payoff will be more than enough for Han to settle up with Jabba—and ensure he never has to haggle with the Hutts again.

All he has to do is infiltrate the ultra-fortified stronghold of a Black Sun crime syndicate underboss and crack the galaxy’s most notoriously impregnable safe. It sounds like a job for miracle workers . . . or madmen. So Han assembles a gallery of rogues who are a little of both—including his indispensable sidekick Chewbacca and the cunning Lando Calrissian. If anyone can dodge, deceive, and defeat heavily armed thugs, killer droids, and Imperial agents alike—and pull off the heist of the century—it’s Solo’s scoundrels. But will their crime really pay, or will it cost them the ultimate price?

“Rapid-fire adventure [that] adds yet another dimension of enjoyment to a rousing galactic romp.”—Library Journal

“Highly entertaining . . . excellent Star Wars . . . There are many twists and turns [and] Zahn manages to find ways to twist them one step further than you’d expect.”—Examiner.com

Timothy Zahn is the author of more than forty novels, nearly ninety short stories and novelettes, and four short fiction collections. In 1984, he won the Hugo Award for best novella. Zahn is best known for his Star Wars novels (Heir to the Empire, Dark Force Rising, The Last Command, Specter of the Past, Vision of the Future, Survivor’s Quest, Outbound Flight, Allegiance, and Choices of One) with more than four million copies of his books in print. Other books include the Cobra series, the Quadrail series, and the young adult Dragonback series. Zahn has a B.S. in physics from Michigan State University and an M.S. from the University of Illinois. He lives with his family on the Oregon coast.

“Rapid-fire adventure [that] adds yet another dimension of enjoyment to a rousing galactic romp.”—Library Journal

“Highly entertaining . . . excellent Star Wars . . . There are many twists and turns [and] Zahn manages to find ways to twist them one step further than you’d expect.”—Examiner.com