The Silent Gondoliers: A Novel (Paperback) 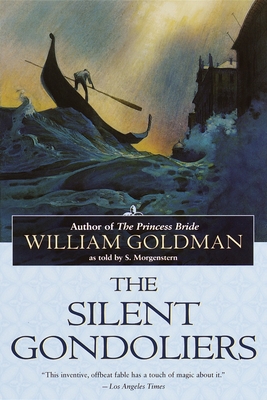 By William Goldman
$15.00
On our shelves now at one or more of our stores

This gonzo tall tale is the only other book Goldman has written in the style of "The Princess Bride." And it's a thing to behold: the way he takes a seemingly scatter-shot mode of storytelling and funnels everything into a hair-raising and absolutely satisfying climax. A book best read in one delirious sitting (or, as I did, read aloud in a day to a bookish and giddy 6th grader).

The return of a beloved classic, from the bestselling author of The Princess Bride!

“This inventive, offbeat fable has a touch of magic about it.”—Los Angeles Times

Once upon a time, the gondoliers of Venice possessed the finest voices in all the world. But, alas, few remember those days—and fewer still were ever blessed to hear such glorious singing.

No one since has discovered the secret behind the sudden silence of the golden-voiced gondoliers. No one, it seems, but S. Morgenstern. Now Morgenstern recounts the sad and noble story of the ambitions, frustrations, and eventual triumph of Luigi, the gondolier with the gooney smile.

Here, in this brilliantly illustrated exposition of the surprising facts behind this all-but-forgotten mystery, S. Morgenstern reveals the fascinating truths about John the Bastard, Laura Lorenzini, the centenarian Cristaldi the Pickle, Enrico Caruso, Porky XII, the Great Sorrento, the Queen of Corsica—and, of course, the one and only Luigi. His tale will captivate you as much as his song!

“Where The Princess Bride was lightheartedly brutal, this story is gently whimsical, well-complemented by Paul Giovanopoulos’s zany drawings.”—San Francisco Examiner-Chronicle

William Goldman is an Academy Award–winning author of screenplays, plays, memoirs, and novels. His first novel, The Temple of Gold (1957), was followed by the script for the Broadway army comedy Blood, Sweat and Stanley Poole (1961). He went on to write the screenplays for many acclaimed films, including Butch Cassidy and the Sundance Kid (1969) and All the President’s Men (1976), for which he won two Academy Awards. He adapted his own novels for the hit movies Marathon Man (1976) and The Princess Bride (1987).

“This inventive, offbeat fable has a touch of magic about it.”—Los Angeles Times

“Where The Princess Bride was lightheartedly brutal, this story is gently whimsical, well-complemented by Paul Giovanopoulos’s zany drawings.”—San Francisco Examiner-Chronicle