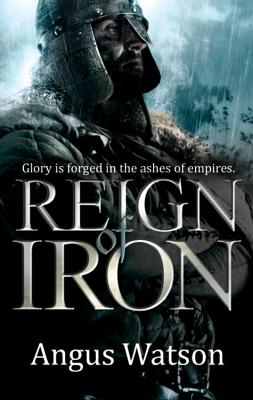 This is book number 3 in the Iron Age series.

WARRIOR QUEENS AND ROMAN INVADERS DO BATTLE IN THE FINAL VOLUME OF THIS THRILLING EPIC FANTASY TRILOGY.

Caesar's soldiers have murdered, massacred and pillaged their way through Gaul and loom on the far side of the sea, ready to descend upon Britain -- with them are an unstoppable legion of men twisted by dark magic. Somehow Queen Lowa must repel the invasion, although her best general is dead and her young druid powerless. She faces impossible odds, but when the alternative is death or slavery, a warrior queen will do whatever it takes to save her people.

EVERY EMPIRE HAS ITS DOWNFALL.

Angus Watson is an author and journalist living in London. He's written hundreds of features for many newspapers including the Times, Financial Times, and the Telegraph, and the latter even sent him to look for Bigfoot. As a fan of both historical fiction and epic fantasy, Angus came up with the idea of writing a fantasy set in the Iron Age when exploring British hillforts for the Telegraph, and developed the story while walking Britain's ancient paths for further articles.

"Watson's tale is gore soaked and profanity laden -- full of visceral combat and earthy humor, and laced with subtle magic."—Publishers Weekly on Age of Iron