You Don't Have to Say You Love Me: A Memoir (Large Print / Hardcover) 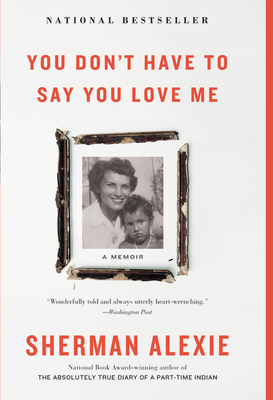 Praise for YOU DON'T HAVE TO SAY YOU LOVE ME:

"Blends poetry and prose, and varies widely in tone as he explores old memories and new grief."—Entertainment Weekly, Summer's 20 Must Read Books

"He specifically focuses on his late mother, showing the many sides of her multifaceted character through dozens of poignant poems and essays. Their relationship is as complicated as Alexie's stories are enthralling."—Stephanie Topacio Long, Bustle, 14 Best Nonfiction Books Coming Out in June 2017

"Sherman Alexie makes poetry out of the darkest parts of his (and his mother's) life... It's all a mighty attempt to understand who his mother was, who she is to him, and how to make peace with her."—Jaime Green, Google Play, Summer Reading

"There's straight personal history here, as well as fable, poetry, and raw and mordant accounts of life....Unexpected revelations are a constant throughout this memoir"—Maureen Corrigan, NPR's "Fresh Air", 6 Books That Will Carry You Away

"If candor is Alexie's superpower, accuracy might be his nemesis.... Throughout, Alexie is courageous and unflinching, delivering a worthy and honest eulogy by showing us his mother and himself in full, everything spectacular and everything scarred."—Michael Kleber-Diggs, The Minneapolis Star Tribune

"[A] poignant, conflicted, raucous memoir of a Native American family...a fine homage to the vexed process of growing up that vividly conveys how family roots continue to bind even after they seem to have been severed."—Publishers Weekly

"Honest, wrenching, and incredibly moving....Highly recommended for all readers. Alexie's portrayals of family relationships, identity, and grief have the universality of great literature."—Library Journal (Starred Review)

Bookseller Praise for YOU DON'T HAVE TO SAY YOU LOVE ME:


"'How does one deliver an honest eulogy?' Alexie asks. And 'how does one commemorate/ the ordinary?' The answer is to remember, confess, pray, rant, and ask more questions. Alexie does all these and more in this powerful, poignant memoir of his mother, a woman so complex she's an entire tribe of contradictions. Did she love him? Did he love her? He answers yes, but worries the questions through stories by turns angry, funny, and raw, and through a dazzling range of poems that include everything from ballads to rhymed couplets to a tour de force sequence of 52 haiku, each as perfect as the squares in the quilts his mother sewed to support the family. While his father steadily drank himself to death, Alexie's mother was a recovering alcoholic who kept her family alive, if often hungry, in an unfinished HUD house on the Spokane Indian Reservation. She was honored by her tribe for her strength and generosity, yet she was often cruel to her children. With this jarring inconsistency at the heart of his brave, compassionate, book, Alexie traces a lineage of violence so powerful it causes victims to become perpetrators."—Laurie Greer, Politics & Prose (Washington, D.C.)

"I am mesmerized by this book that is painful as they come yet has me hooked. [...] I cannot put it down as his raw honesty and quirky style has gripped me in some kind of way that is hard to describe. [W]hen I do things like drive to work or make dinner I keep thinking about it..."—Sheryl Cotleur, Copperfield's Books (Sebastopol, CA)

"To say that I was moved by Sherman Alexie's memoir is a terrible understatement; in fact, there is a pulse in this book that has worked its way into my being and irrevocably changed how I think about my own life. Alexie's kaleidoscopic approach to storytelling is so representative of the feeling of being human, with childhood memory, relationships, love, trauma, and art all moving in and out of focus at once. At the center of YOU DON'T HAVE TO SAY YOU LOVE ME is a deep grieving, for Alexie's mother, for the ways in which parental love is imperfect, for unthinkable personal and cultural traumas. But Alexie's brilliance is in holding multiple truths, that one can experience simultaneously both trauma and hope, grief and humor, violence and love. I, like Alexie, "tend to fall in love with the unnamable," that nebulous complexity at the heart of the human experience that can only be understood by holding on to all of the pieces of your life at once, a practice both beautiful and terrifying. Alexie achieves this exquisitely, and YOU DON'T HAVE TO SAY YOU LOVE ME is an unforgettable work.—Kelsey O'Rourke, Literati Bookstore (Ann Arbor, MI)