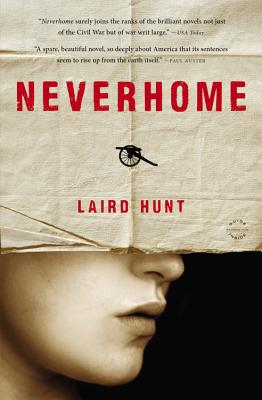 I want to be able to just put this book in your hands and say, "trust me." This tale takes place during the Civil War. Ash decides to join the war in place of her husband, who remains behind to tend the homestead. Based on actual letters written by women, who fought as men in that war, Ash's voice is original and compelling, as she reels out her unique tale. At times mythic and adventurous, and other times crushingly realistic about the violence of war, this was one of my favorite books in recent years, and I hope it becomes one of your's too.

Why have I not read Laird Hunt before? This novel is so spare yet so rich. The character of Ash Thompson is an amazing creation and her story is utterly moving and captivating. This is historical fiction unlike that you've read before.

She calls herself Ash, but that's not her real name. She is a farmer's faithful wife, but she has left her husband to don the uniform of a Union soldier in the Civil War. Neverhome tells the harrowing story of Ash Thompson during the battle for the South. Through bloodshed and hysteria and heartbreak, she becomes a hero, a folk legend, a madwoman and a traitor to the American cause.

Laird Hunt's dazzling novel throws a light on the adventurous women who chose to fight instead of stay behind. It is also a mystery story: why did Ash leave and her husband stay? Why can she not return? What will she have to go through to make it back home?

In gorgeous prose, Hunt's rebellious young heroine fights her way through history, and back home to her husband, and finally into our hearts.

Laird Hunt is the author of The Evening Road. His previous novel, Neverhome, was a New York Times Book Review Editor's Choice selection, an IndieNext selection, winner of the Grand Prix de Litterature Americaine and The Bridge prize, and a finalist for the Prix Femina Etranger. A resident of Boulder, CO, he is on the faculty in the creative writing PhD program at the University of Denver.