When Everything Changed: A Keepsake Journal: The Amazing Journey of American Women from 1960 to the Present (Hardcover) 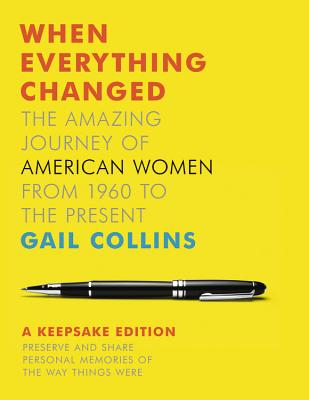 "Did feminism fail? Gail Collins's smart, thorough, often droll and extremely readable account of women's recent history in America not only answers this question brilliantly, but also poses new ones about the past and the present."—Amy Bloom, The New York Times Book Review

"Riveting and remarkably thorough in its account of this tumultuous period."
—Rasha Madkour, Los Angeles Times

"Gail Collins has an unflaggingly intelligent conversational style that gives this book a personal and authoritative tone all at once."
—Cathleen Schine, The New York Review of Books

"Gail Collins is such a delicious wrter, it's easy to forget the scope of her scholarship in this remarkable look at women's progress."
—People