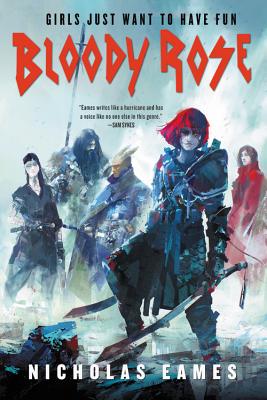 Not only one of the funnest series I've read in a while, but also some of the best world building and deeply thought out characters. I was just in a "fun adventures with my bros" mood when I picked these up, I had no idea how smart and caring the writing would turn out to be.

A band of fabled mercenaries tour a wild fantasy landscape, battling monsters in arenas in front of thousands of adoring fans. But, a secret and dangerous gig ushers them to the frozen north, and the band is never one to waste a shot at glory.

Tam Hashford is tired of working at her local pub, slinging drinks for world-famous mercenaries and listening to the bards sing of adventure and glory in the world beyond her sleepy hometown.

When the biggest mercenary band of all, led by the infamous Bloody Rose, rolls into town, Tam jumps at the chance to sign on as their bard. It's adventure she wants -- and adventure she gets as the crew embark on a quest that will end in one of two ways: glory or death.

It's time to take a walk on the wyld side.

"Humorous twists and pulse-ratcheting action abound in Bloody Rose, but its Eames' knack for heart-wrenching poignancy that makes his warm, wonderful fantasy so harmonious." -- NPR

For more from Nicholas Eames, check out:
Kings of the Wyld

Nicholas Eames was born to parents of infinite patience and unstinting support in Wingham, Ontario. Though he attended college for theatre arts, he gave up acting to pursue the infinitely more attainable profession of 'epic fantasy novelist.' Kings of the Wyld is his first novel. Nicholas loves black coffee, neat whiskey, the month of October, and video games. He currently lives in Ontario, Canada, and is very probably writing at this very moment.

"Bloody Rose solidifies what Kings of the Wyld proved. Eames writes like a hurricane and has a voice like no one else in this genre."—Sam Sykes

"I laughed, and wept, and worried a lot, and had the most tremendous time reading Bloody Rose. Eames is a gifted and entertaining storyteller."—Kevin Hearne

"Humorous twists and pulse-ratcheting action abound in Bloody Rose, but its Eames' knack for heart-wrenching poignancy that makes his warm, wonderful fantasy so harmonious."—NPR

"Kings of the Wyld is gritty but not grim. It was a blast to read, from start to finish. The boys are getting the band back together, and woe be to anyone who stands in their way. Magic swords, broken promises, and some of the craziest action you're likely to read this side of the Wyld. Reading this book made me want to grab a sword and set off on an epic quest."
—Christopher Paolini on Kings of the Wyld

"I was a big fan of Kings of the Wyld, but I think Bloody Rose has actually topped it. Eames once again hits the perfect balance of humor and heart, irreverent references and real emotion. The characters are great, the adventure is epic, and he's slowly deepening the worldbuilding in a way that has me eager for more."—Django Wexler, author of The Thousand Names

"High-octane thrill ride, with one splashy action battle sequence after another, with the stakes ever-rising, until the final countdown."—B&N SF & Fantasy Blog

"A fantastic read, a rollicking, page-turning, edge-of-your-seat road-trip of a book. Great characters, loveable rogues that I genuinely cared about and all manner of fantastical monsters. All spiced with a sly sense of humour that had me smiling throughout. Wonderful."—John Gwynne on Kings of the Wyld

"Brilliant debut novel... Eames has cranked the thrills of epic fantasy up to 11... Moreover, the plot is emotionally rewarding, original, and hilarious. Eames clearly set out to write something fun to read, and he has succeeded spectacularly."—Publishers Weekly (starred review) on Kings of the Wyld

"Absolutely awesome. If the Beatles held a concert tomorrow (with all the necromancy required for that to happen), it still wouldn't be as good a 'getting the band back together' story as this. Full of heroes, humor, and heart."—Jon Hollins on Kings of the Wyld

"Nicholas Eames brings brazen fun and a rock & roll sensibility to the fantasy genre."—Sebastien de Castell on Kings of the Wyld

"An absolutely outstanding debut . . . [It has] all the heart and passion that great fantasy can bring in the hands of a master."—Myke Cole on Kings of the Wyld

"Kings of the Wyld took me back to my Dungeons and Dragons days. It has well-crafted characters long past their best but still fighting, non-stop fantasy action and welcome touches of humor. Great reading!"—Ian Irvine on Kings of the Wyld

"A promising, fast-paced debut that balances classic quest fantasy with modern sensibilities and liberal doses of humor. Huzzah!"—Alex Marshall on Kings of the Wyld

"An outstanding debut which will make you laugh and cry and hold your breath. This is a book that has it all."—K. J. Parker on Kings of the Wyld

"Nicholas Eames is the voice of modern fantasy."—Michael R. Fletcher on Kings of the Wyld

"Eames' debut fantasy tale has it all....Readers will not be able to put this book down."—Booklist (starred review) on Kings of the Wyld