Kings of the Wyld (The Band) (Paperback) 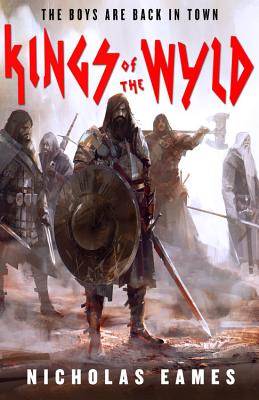 This book was a blast, like being part of a D&D campaign if it were co-DM'd by the author Lish McBride and Ben Affleck's character from the movie "Extract".

A retired group of legendary mercenaries get the band back together for one last impossible mission in this award-winning debut epic fantasy.

Clay Cooper and his band were once the best of the best, the most feared and renowned crew of mercenaries this side of the Heartwyld.

Their glory days long past, the mercs have grown apart and grown old, fat, drunk, or a combination of the three. Then an ex-bandmate turns up at Clay's door with a plea for help -- the kind of mission that only the very brave or the very stupid would sign up for.

It's time to get the band back together.

Nicholas Eames was born to parents of infinite patience and unstinting support in Wingham, Ontario. Though he attended college for theatre arts, he gave up acting to pursue the infinitely more attainable profession of 'epic fantasy novelist.' Kings of the Wyld is his first novel. Nicholas loves black coffee, neat whiskey, the month of October, and video games. He currently lives in Ontario, Canada, and is very probably writing at this very moment.

"Kings of the Wyld is gritty but not grim. It was a blast to read, from start to finish. The boys are getting the band back together, and woe be to anyone who stands in their way. Magic swords, broken promises, and some of the craziest action you're likely to read this side of the Wyld. Reading this book made me want to grab a sword and set off on an epic quest."—Christopher Paolini

"A fantastic read, a rollicking, page-turning, edge-of-your-seat road-trip of a book. Great characters, loveable rogues that I genuinely cared about and all manner of fantastical monsters. All spiced with a sly sense of humour that had me smiling throughout. Wonderful."—John Gwynne

"A comedy, an adventure tale, a consideration on growing older, and a sendup of fantasy conventions, all at the same time. It also has heart. In short: it rocks....I finished this book in one night. If I could, I'd see the tour, and buy the t-shirt. Instead, I'll have to content myself with waiting for the sequel, and reading it again."—B&N SF & Fantasy Blog

"Brilliant debut novel... Eames has cranked the thrills of epic fantasy up to 11... Moreover, the plot is emotionally rewarding, original, and hilarious. Eames clearly set out to write something fun to read, and he has succeeded spectacularly."—Publishers Weekly (starred review)

"Absolutely awesome. If the Beatles held a concert tomorrow (with all the necromancy required for that to happen), it still wouldn't be as good a 'getting the band back together' story as this. Full of heroes, humor, and heart."—Jon Hollins

"An absolutely outstanding debut . . . [It has] all the heart and passion that great fantasy can bring in the hands of a master."—Myke Cole

"Kings of the Wyld took me back to my Dungeons and Dragons days. It has well-crafted characters long past their best but still fighting, non-stop fantasy action and welcome touches of humor. Great reading!"—Ian Irvine

"An outstanding debut which will make you laugh and cry and hold your breath. This is a book that has it all."—K. J. Parker

"Escapism of my favorite type - noble quests, edge-of-the-seat action, and well-rounded, likeable characters that carve out their own unique definition of "family". If you like your fantasy gritty and your humor dark, then this is the next book for you."—Forbidden Planet

"Nicholas Eames is the voice of modern fantasy."—Michael R. Fletcher

"Eames' debut fantasy tale has it all....Readers will not be able to put this book down."—Booklist (starred review)

"Mercenaries get the rock star treatment in this funny, heart-filled epic fantasy."—Book Riot