The Necessary Death of Lewis Winter (The Glasgow Trilogy #1) (Paperback) 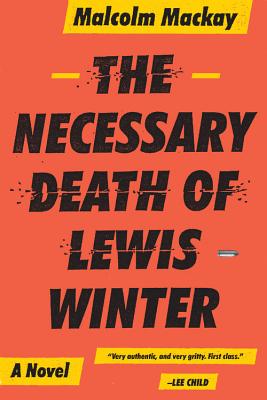 This is book number 1 in the The Glasgow Trilogy series.

Shug Francis has been running a successful car theft ring in Glasgow for years, and now he wants to muscle his way into the drug business. When Shug brings in Lewis Winter to deal drugs on Peter Jamieson's turf, Jamieson decides to send Shug a clear message in the form of Lewis Winter's corpse. With veteran gunman Frank MacLeod out recovering from hip surgery, Jamieson hires the promising young freelancer Calum MacLean to make the hit. Mackay's Glasgow Trilogy is all fun and no joy. You will be rushing out to get the second book immediately after finishing the first. — From Andrew

A twenty-nine-year-old man lives alone in his Glasgow flat. The telephone rings; a casual conversation, but behind this a job offer. The clues are there if you know to look for them. He is an expert. A loner. Freelance. Another job is another job, but what if this organization wants more?

A meeting at a club. An offer. A target: Lewis Winter, a necessary sacrifice that will be only the first step in an all-out war between crime syndicates the likes of which hasn't been seen for decades. It's easy to kill a man. It's hard to kill a man well. People who do it well know this. People who do it badly find out the hard way. The hard way has consequences.

Malcolm Mackay's Glasgow Trilogy has been nominated for several international prizes. The Necessary Death of Lewis Winter was shortlisted for the Edgar Awards' Best Paperback Original, the CWA John Creasey (New Blood) Dagger, and the Theakstons Old Peculier Crime Novel of the Year Award. How a Gunman Says Goodbye won the Deanston Scottish Crime Book of the Year Award. Mackay was born in Stornoway on Scotland's Isle of Lewis, where he still lives.

"[Mackay's] Glasgow Trilogy is classic . . . The subject is organized crime, but it's the author's blunt eloquence that matters. Don't pick up a Mackay book unless you've got spare time. They're habit-forming."
—Janet Maslin, New York Times

"It's been a long time since so many pages went by so fast .... Mackay is a natural storyteller [with] a voice to which we're happy to surrender. Surprisingly rewarding .... a thriller trilogy that thrills. "
—Dennis Drabelle, Washington Post

"Exhilarating, canny and strikingly original ... Mackay is less interested in violence than in the insides of his vivid characters' heads, including those of a police detective and the sad-sack victim. Darting seamlessly in and out of those heads, Mackay reveals their thoughts (sometimes dumb, sometimes shrewd) as they jockey for position in a complex power struggle. Remarkable."
—Adam Woog, Seattle Times

"Glasgow's a tough city and this is a tough book . . . very authentic, very gritty, you can really feel the streets. They call this genre Tartan Noir and absolutely The Necessary Death of Lewis Winter is a first class member of that."—Lee Child

"A remarkably original debut . . . this is a book that it would be hard not to finish in one sitting . . . a wholly believable and unnerving portrait of organised crime."
—Observer

"Remarkable. Mackay's achievement is all the more stunning because drawing on his sublime imagination and innate empathy he has created a cast of characters so vivid - especially MacLean, who knows how hard it is to kill a man - that they live on in the memory long after the final page."
—Daily Mail