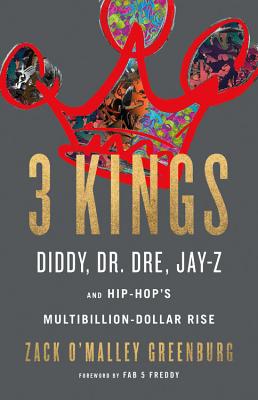 By Zack O'Malley Greenburg
$28.00
Unavailable at this time.

Structurally modeled after Walter Isaacson's book on the tech industry (The Innovators), this book tells the story of a different group of emerging billionaires, substituting Steve Jobs, Bill Gates, and Larry Page for Dr. Dre, Diddy, and Jay-Z.  Succinctly telling the story of the rise of hip-hop through the biography of three of the biggest names in rap, Greenburg has crafted a fantastic portrait of modern music entrepreneurship.
*A perfect companion book to the fantastic HBO documentary mini-series "The Defiant Ones"

Being successful musicians was simply never enough for the three kings of hip-hop. Diddy, Dr. Dre, and Jay-Z lifted themselves from childhood adversity into tycoon territory, amassing levels of fame and wealth that not only outshone all other contemporary hip-hop artists, but with a combined net worth of well over $2 billion made them the three richest American musicians, period.

Yet their fortunes have little to do with selling their own albums: between Diddy's Ciroc vodka, Dre's $3 billion sale of his Beats headphones to Apple, and Jay-Z's Tidal streaming service and other assets, these artists have transcended pop music fame to become lifestyle icons and moguls.

Hip-hop is no longer just a musical genre; it's become a way of life that encompasses fashion, film, food, drink, sports, electronics and more -- one that has opened new paths to profit and to critical and commercial acclaim. Thanks in large part to the Three Kings -- who all started their own record labels and released classic albums before moving on to become multifaceted businessmen -- hip-hop has been transformed from a genre spawned in poverty into a truly global multibillion-dollar industry.

These men are the modern embodiment of the American Dream, but their stories as great thinkers and entrepreneurs have yet to be told in full. Based on a decade of reporting, and interviews with more than 100 sources including hip-hop pioneers Russell Simmons and Fab 5 Freddy; new-breed executives like former Def Jam chief Kevin Liles and venture capitalist Troy Carter; and stars from Swizz Beatz to Shaquille O'Neal, 3 Kings tells the fascinating story of the rise and rise of the three most influential musicians in America.

Zack O'Malley Greenburg is the senior editor of media & entertainment at Forbes and the author of two books: Empire State of Mind, a business-focused biography of Jay-Z (Penguin/Portfolio, 2011) and Michael Jackson, Inc. (Simon & Schuster/Atria, 2014), a deep dive into the King of Pop's financial realm. Zack graduated from Yale in 2007 with a degree in American Studies and immediately joined the staff at Forbes, where his annual Hip-Hop Cash Kings packages gave the genre its first sustained, serious coverage in the mainstream business press. His work has also appeared in the Washington Post, Billboard, Vibe, McSweeney's, and Sports Illustrated. He lives in New York with his wife and cats.

"There is no keener, more knowledgeable and scintillating observer of the modern cultural scene than Zack Greenburg. He proves it with this definitive, absorbing history of hip-hop and its three mega-giants. It reads better than an adventure novel and provides highly useful entrepreneurial lessons for anyone who wants to achieve success."—Steve Forbes, Editor-in-Chief of Forbes

"Hip-hop is one of the most significant cultural forces of the past half-century, not just in music but in art, fashion, film, technology, politics and business. Greenburg provides a comprehensive review of hip-hop history on all fronts. It will inspire newcomers and deepen the appreciation of aficionados, while explaining just how hip-hop took its current place on the world stage."—Arianna Huffington, founder of Thrive Global and Huffington Post

"I've been blessed to work with Diddy, Jay-Z and Dr. Dre, and let me be honest: 3 Kings gives you the major keys to how the biggest bosses on the planet keep winning."—DJ Khaled, recording artist and entrepreneur

"Greenburg's narrative traces how the titular kings' trajectories transformed a music genre into a global juggernaut that's equal parts industry, culture and movement. There are copious lessons here in bringing ferocious energy to a concept--and honing that concept for the masses--that will serve would-be moguls in any arena."—Kathryn Dill, Careers Editor, CNBC

"Finance is a central focus in hip-hop, but few writers have the facts and figures to discuss it credibly. Greenburg demystifies three iconic rap artists who these days make most of their money apart from rap. It's a well-constructed analysis that you don't need to be an expert to appreciate."—Ben Westhoff, author of Original Gangstas

"A vividly clear depiction of the commercial empires built by Diddy, Jay-Z, and Dr. Dre. The book documents their humble beginnings, their rise to fame and illustrates the important connection to the pioneers who paved the way for their success... an exceptional read."—Rocky Bucano, President of the Universal Hip-Hop Museum

"If Jay-Z, Diddy, and Dr. Dre are shrouded in mystery and inclined towards self-mythologizing, Greenburg does one of the most difficult things a reporter can do: he artfully chronicles their ascent, carefully accounts for their fortunes, and renders moguls as actual flesh and blood mortals. It reaffirms his bona fides as the preeminent journalist covering the business of hip-hop."—Jeff Weiss, author of Biggie vs 2pac

"Greenburg reveals a blueprint for how billions were made by and for the artists themselves. An excellent read and a valuable education for entrepreneurs, industry insiders, outsiders, and music aficionados."—Josh Davis, author of Two Awesome Hours

"Greenburg has become one of the rare reporters to bring dignified coverage of the hip-hip business into the mainstream."—Dan Charnas, author of The Big Payback

"The number of hundred-million-dollar deals Greenburg chronicles is staggering. But he's also aware that hip-hop's megamogul phase is fading, as artists like Kanye West and A$AP Rocky forgo chasing huge profits in search for prestige. 3 Kings proves it was sweet while it lasted."—Rolling Stone

"Engaging reporting that will satisfy neophytes and devotees alike. A wide-ranging survey of the first four decades of hip-hop that vividly brings some of the culture's biggest success stories into one place."—Kirkus

"Greenburg's ability to weave the facts and figures of his subjects into hip-hop's cultural lineage makes 3 Kings an engaging read for fans of the beats or business."—Lipstick Alley

Praise for Empire State of Mind

"One of the year's best rock books."—Bloomberg News

"Fascinating, well-done biography of one of the most extraordinary entrepreneurs of our era."—Steve Forbes

"Zack O'Malley Greenburg has become one of the rare reporters to bring dignified coverage of the hip-hop business into the mainstream. Empire State of Mind is a pure product of Greenburg's care and insight, an exploration of hip-hop's most enigmatic mogul, Jay-Z."—Dan Charnas, author of The Big Payback: The History of the Business of Hip-Hop