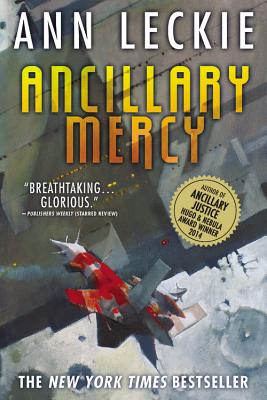 Ann Leckie writes sci-fi with the same sense of justice as Octavia Butler and Ursula Le Guin, with the addition of action sequences and space battles that I can only pray I will one day get to see on the big screen. Already read and loved the first two, but concerned that Leckie won't stick the landing? Don't worry, she does.

Breq and her crew must stand against an old and powerful enemy, the Lord of the Radch, and fight for the right to determine their own destinies in the stunning conclusion to the NYT bestselling Imperial Radch trilogy A must read for fans of Ursula K. Le Guin and James S. A. Corey.

For a moment, things seemed to be under control for Breq, the soldier who used to be a warship. Then a search of Athoek Station's slums turns up someone who shouldn't exist, and a messenger from the mysterious Presger empire arrives, as does Breq's enemy, the divided and quite possibly insane Anaander Mianaai -- ruler of an empire at war with itself.

Breq refuses to flee with her ship and crew, because that would leave the people of Athoek in terrible danger. The odds aren't good, but that's never stopped her before.

"If you don't know the Ancillary series by now, you probably should. Ann Leckie's sociopolitical space opera almost singlehandedly breathed new cool into the stereotype of spaceships trundling through far-off systems amid laser battles. ... [Ancillary Mercy] earns the credit it's received: As a capstone to a series that shook genre expectations, as our closing installment of an immersively realized world, and as the poignant story of a ship that learned to sing."—NPR Books

"This trilogy will stand as a classic of sf for the ages."—Library Journal

"No science-fiction series as descriptive of our current political and cultural moment or as insistent that we open our eyes to it."— Slate

"A magnificent capstone to this promising trilogy."—RT Book Reviews (4.5 stars)

"The sort of space opera audiences have been waiting for."—NPR Books on Ancillary Sword

"Breq's struggle for meaningful justice in a society designed to favor the strong is as engaging as ever. Readers new to the author will be enthralled, and those familiar with the first book will find that the faith it inspired has not been misplaced."—Publishers Weekly on Ancillary Sword

"Leckie proves she's no mere flash in the pan with this follow-up to her multiple-award-winning debut space opera, Ancillary Justice."—Kirkus on Ancillary Sword

"This follow-up builds on the world and characters that the author introduced in the first book and takes the story in new directions. There is much more to explore in Leckie's universe, one of the most original in SF today."—Library Journal (starred review) on Ancillary Sword

"An ambitious space opera that proves that Justice was no fluke.... a book every serious reader of science fiction should pick up."—RT Book Reviews on Ancillary Sword

"A gripping read, with top-notch world building and a set of rich subtexts about human rights, colonialism -- and (yes) hive mind sex."—io9 on Ancillary Sword

"Leckie investigates what it means to be human, to be an individual and to live in a civilized society."—Scientific American on Ancillary Sword

"Superb... Sword proves that [Leckie]'s not a one-hit wonder. I look forward to the rest of Breg's tale."—St. Louis Post-Dispatch on Ancillary Sword

"Ancillary Justice is the mind-blowing space opera you've been needing...This is a novel that will thrill you like the page-turner it is, but stick with you for a long time afterward."—io9 (included in 'This Fall's Must-Read Science Fiction and Fantasy Books')

"It's not every day a debut novel by an author you'd never heard of before derails your entire afternoon with its brilliance. But when my review copy of Ancillary Justice arrived, that's exactly what it did. In fact, it arrowed upward to reach a pretty high position on my list of best space opera novels ever."—Liz Bourke, Tor.com

"Establishes Leckie as an heir to Banks and Cherryh."—Elizabeth Bear on Ancillary Justice

"A double-threaded narrative proves seductive, drawing the reader into the naive but determined protagonist's efforts to transform an unjust universe. Leckie uses...an expansionist galaxy-spinning empire [and] a protagonist on a single-minded quest for justice to transcend space-opera conventions in innovative ways. This impressive debut succeeds in making Breq a protagonist readers will invest in, and establishes Leckie as a talent to watch."—Publishers Weekly on Ancillary Justice

"Using the format of SF military adventure blended with hints of space opera, Leckie explores the expanded meaning of human nature and the uneasy balance between individuality and membership in a group identity. Leckie is a newcomer to watch as she expands on the history and future of her new and exciting universe."—Library Journal on Ancillary Justice

"A sharply written space opera with a richly imagined sense of detail and place, this debut novel from Ann Leckie works as both an evocative science fiction tale and an involving character study...it's also a strongly female-driven piece, tackling ideas about politics and gender in a way that's both engaging and provocative...Ancillary Justice is a gripping read that's well worth a look."—SFX (UK) on Ancillary Justice

"It engages, it excites, and it challenges the way the reader views our world. Leckie may be a former Secretary of the Science Fiction Writers of America, but she's the President of this year's crop of debut novelists. Ancillary Justice might be the best science fiction novel of this very young decade."—Justin Landon, Staffer's Book Review on Ancillary Justice

"The sort of book that the Clarke Award wishes it had last year ... be prepared to see Ancillary Justice bandied around a lot come awards season. (As it should be)."—Jared Shurin, Pornokitsch

"Total gamechanger. Get it, read it, wish to hell you'd written it. Ann Leckie's Ancillary Justice may well be the most important book Orbit has published in ages."—Paul Graham Raven on Ancillary Justice