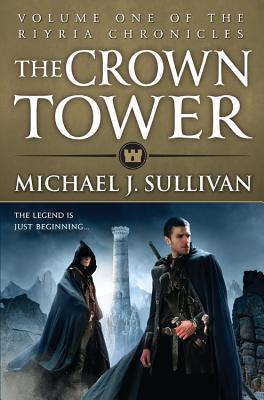 This is book number 1 in the The Riyria Chronicles series.

Two men who hate each other. One impossible mission. A legend in the making.

Hadrian Blackwater, a warrior with nothing to fight for, is paired with Royce Melborn, a thieving assassin with nothing to lose. Hired by an old wizard, they must steal a treasure that no one can reach. The Crown Tower is the impregnable remains of the grandest fortress ever built and home to the realm's most prized possessions. But it isn't gold or jewels that the wizard is after, and if he can just keep them from killing each other, they just might succeed.

Born in Detroit, Michigan, Michael J. Sullivan has lived in Vermont, North Carolina, and Virginia. He worked as a commercial artist and illustrator, founding his own advertising agency in 1996, which he closed in 2005 to pursue writing full-time. The Crown Conspiracy is his first published work. He currently resides in Fairfax, Virginia with his wife and three children. The author's website can be found at www.riyria.com and on twitter @author_sullivan.

"Filled with adventure and clever dialog and featuring a pair of not-quite-heroes whose loyalties to each other provide them with their greatest strength, this epic fantasy showcases the arrival of a master storyteller... A winning debut for fantasy lovers."—Library Journal on Theft of Swords

"A whirlwind of twists, earth-shattering surprises and deadly betrayal."—Literary Magic

"Mr. Sullivan continues to impress. In Royce and Hadrian he has created some of the best characters the genre has seen in some time, and in Avempartha he shows that he knows what to do with them. These books should be in every bookstore and I really hope that they are someday."—Speculative Fiction Junkie