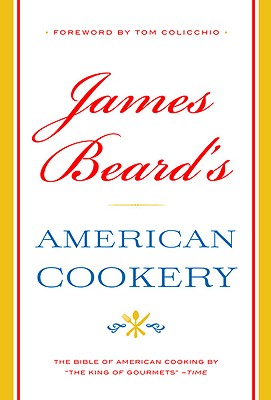 The classic, must-have American cookbook from one of our greatest authorities on food.

James Beard was the "dean of American cookery" (New York Times), and he put practically everything he learned about cooking into this single magnificent--now classic--cookbook. JAMES BEARD'S AMERICAN COOKERY includes more than fifteen hundred of his favorite and most successful recipes, as well as advice on dozens of cooking questions, from choosing meats and vegetables to preserving fruit and making real cheeseburgers. A celebration of the roots of cooking in the American style, this repackaged edition features the original text and color illustrations, and a new foreword by Tom Colicchio. Like Mastering the Art of French Cooking and The Joy of Cooking, it is a standard reference no kitchen is complete without.

Until his death in 1985, James Beard was the nation's most acclaimed chef and food writer. The founder and director of the celebrated cooking classes in New York that still bear his name, Beard wrote James Beard's New Fish Cookery, The James Beard Cookbook, Menus for Entertaining, Beard on Bread, Beard on Food, and other works on the gastronomic arts.

"The bible of American cooking by 'the king of gourmets'."
—Time

"I felt a shiver as I unpacked the new edition of James Beard's American Cookery, this big, fat, generous book, so like Jim himself. I just held it for a few minutes, remembering times in his kitchen, his big hand guiding mine in the motion of making mayonnaise with a fork. . . . It strikes me as timely that chefs who know only his image on a medal hung round their neck have this chance to see what James was cooking before they were born." —Gael Greene, Insatiable-critic.com

"The beauty of this book is that it allows you . . . to experience firsthand what made James Beard special and unique. His voice can be heard through his no-nonsense recipes and the choices he made that celebrated even simple, humble dishes for what they were: good food." —Tom Colicchio, 2010 James Beard Foundation Outstanding Chef and head judge on Top Chef, from the Foreword

"The tome's enduring popularity is due to the fact that it does more than deliver superb recipes, it digs deep into the history of American cuisine."
—Fox News, -