When Everything Changed: The Amazing Journey of American Women from 1960 to the Present (Hardcover) 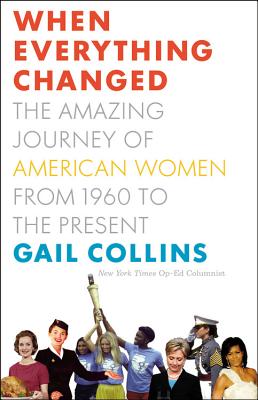 "Gail Collins's When Everything Changed points out what the women on "Mad Men" know: that period in our history was less enjoyable for the ladies.... The early pages of Ms. Collins's book are peppered with accounts of incidents so outrageous they almost seem like jokes....but Ms. Collins underlines the serious consequences of such risible moments by including the stories of individual women-from overworked housewives to marginalized politicians-whose lives were cramped and deformed by the culture's low opinion of their capabilities.... Ms. Collins reminds us of how many aspects of our lives were affected by the battles these women fought. And even readers who lived through this era may be surprised to discover how much they never knew, or have forgotten...Among the impressive features of Ms. Collins's book is her genial, fair-minded sympathy, her refusal to smirk at the excesses of the most radical '70s feminists or at the stance of women, among them Phyllis Schlafly, who counseled their sisters to stay home where they belonged. This evenhandedness seems all the more admirable later in the book, when she considers the significance of Hillary Rodham Clinton's and Sarah Palin's roles in the 2008 presidential election."—Francine Prose, New York Times

"Did feminism fail? Gail Collins's smart, thorough, often droll and extremely readable account of women's recent history in America not only answers this question brilliantly, but also poses new ones about the past and the present. . . . Collins . . .begins When Everything Changed with the best summary of American women's social and political history that I've read. . . .One of the many pleasures {here} is that Collins also reminds us of what women did in private."—Amy Bloom, The New York Times Book Review

"What better time to look at American women's progress since the '60s, now that the dust has settled on the 2008 presidential election when so much was won (and lost) by women?... Gail Collins's near epic history When Everything Changed...also captures the playfulness and humor in women's advancement."—Elizabeth Toohey, The Christian Science Monitor

"'The past is a foreign country' is the kind of hallowed quotation that's resolutely opaque until you stumble on something that drives home its emotional truth. The uncanny feeling it references is that one that recurs frequently as you read When Everything Changed, the absorbing history of feminism and American women's lives by Gail Collins, the resident editorial fount of wry Midwestern common sense at The New York Times.... What Collins does, which so pitiably few pop-history writers do, is bring the stories, the anecdotes that come to life and pull you in."—Ben Dickinson, Elle

"This is not only a fascinating record of how far women have come, it is also a missive to a new generation of women, reminding them to keep the faith."
—Katherine Boyle, Booklist

"Fascinating...This story of how ideas that were once the norm began to seem unfair and then absurd is what Gail Collins tells in her lively new book. Until now, the second wave women's movement hasn't had its big ambitious history-the equivalent to Taylor Branch's multivolume narrative of the civil rights movement. There have been brilliant memoirs and revealing biographies and scholarly books that took slices of the movement and put them under a magnifying glass, but nothing as sweeping and accessible as this."
—Margaret Talbot, Slate.com's "Double X"

"A lively account...Collins uses her great sense of revealing anecdote, engaging personalities, representative case histories, resonant stories, and startling details to defamiliarize a decade we thought we remembered, and to show how truly far American women have come in every aspect of their lives.... Collins's message is inspiring and timely, and all the techniques she employs to make this book fun to read--and impossible to deny--deserve critical praise as well as popular success."
—Elaine Showalter, Progressive Book Club

"Provides a sweeping, fascinating look at modern women in our country.... It may be a history book, but When Everything Changed reads like a page-turning saga, a race through the years to learn how we got here."—Eliza Borné, BookPage.com

"I should mention that Collins is at the top of my guest list for my imaginary dinner party, the theme of which would be: 'Famous fun people I'd like to meet and talk with, but probably never will'...Readers will appreciate the exceptional detail with which Collins lays out the accepted universe of closed opportunities and limited horizons that women faced in 1960. Collins interviewed a variety of women from around the country, and it is fascinating to hear them describe a world that seems unthinkable now but which few could imagine challenging at the time....The stories that emerge are...deeply moving."
—Sharon Ullman, Boston Sunday Globe

"Social history at its best, an engaging and accessible collection of facts fleshed out with cameo appearances by and capsule biographies of people who played a role in transforming the lives of American women."
—MiChelle Jones, Pittsburgh Post-Gazette

"In her pithy, wide-ranging and readable new book, Gail Collins whisks us through nearly five decades of women's history... Famous names and familiar stories appear, but what is most compelling are the vignettes of women who would have remained obscure without the work of Collins and her research team. Through their stories we experience the rat-a-tat-tat of daily indignities--big and small--that built to a crescendo we now call the women's movement."
—Connie Schultz, The Cleveland Plain Dealer

"New York Times columnist Collins is such a delicious writer, it's easy to forget the scope of her scholarship in this remarkable look at women's progress over the past 50 years.... Next time you're sitting by yourself, happily, in a café, thank Betty Friedan, who was kicked out of a Ritz-Carlton bar for drinking alone, wrote about it--and helped spark a revolution."—Judith Newman, People

"In a fascinating history, Gail Collins goes behind the scenes of the women's rights movement.... When Everything Changed provides a sweeping, fascinating look at modern women in our country. Filled with facts, court cases and legislation, the book is rich with personal anecdotes. Collins and her researchers interviewed more than 100 women for this history, and for many contemporary readers, their findings will be startling and sometimes heartbreaking.... The end of her book will make many readers swell with pride--it features updates on the lives of the interview subjects featured in the book, many of whom went on to break barriers for many years. The story their lives helped write--of American women from the 1960s to today--is inspiring and compelling."—Eliza Borné, BookPage

"Women aren't nostalgic for the old days. If anyone is, just watch a few episodes of "Mad Men" as an antidote, with its suffocated Mad Wife Betty Draper and its slapped-down Working Woman Peggy Olsen. If you prefer nonfiction, leaf through the early chapters of Gail Collins's history When Everything Changed to those magical yesteryears when a flight attendant was weighed, measured, and hired to be a flying geisha."—Ellen Goodman, The Seattle Times

"Readers familiar with her work will recognize her eye for ironic detail in this wry, insightful and comprehensive book...there are many wonderful, triumphal moments...Collins wants us to remember how bad things were in the 1960s, and she succeeds."
—Jill Lawrence, Politics Daily

"An enormously entertaining cultural and social history...Without preaching, Collins shows the sexism that women (and men) once accepted as the norm, and she backs up her often eye-opening stories with hard facts and solid statistics.... Collins can be deadly serious and great fun to read at the same time. A revelatory book for readers of both sexes, and sure to become required reading for any American women's-studies course."
—Kirkus

"Compulsively readable....Millions lived through the material Collins covers in her new book. To those who did not, it might read a little like science fiction."
—Chris Vognar, The Dallas Morning News

"Gail Collins walks you through a fascinating five decades of history that shows you just how far women have come."
—LadiesHomeJournal.com

"The new must-have text for modern feminists. Her simple message to our generation: We must not take our astounding journey for granted."
—Ami Angelwicz, The Frisky.com