Those Guys Have All the Fun: Inside the World of ESPN (Hardcover) 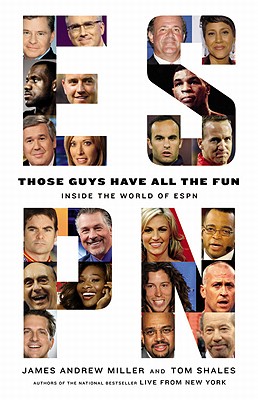 In the exclusive behind the scenes look, sports fans can unlock the fascinating history of the channel that changed the way people watch and interact with their favorite teams.
It began, in 1979, as a mad idea of starting a cable channel to televise local sporting events throughout the state of Connecticut. Today, ESPN is arguably the most successful network in modern television history, spanning eight channels in the Unites States and around the world. But the inside story of its rise has never been fully told-until now.

Drawing upon over 500 interviews with the greatest names in ESPN's history and an All-Star collection of some of the world's finest athletes, bestselling authors James Miller and Tom Shales take us behind the cameras. Now, in their own words, the men and women who made ESPN great reveal the secrets behind its success-as well as the many scandals, rivalries, off-screen battles and triumphs that have accompanied that ascent. From the unknown producers and business visionaries to the most famous faces on television, it's all here.

James Andrew Miller is the author of Running in Place: Inside the Senate and Live from New York. He has also written for the New York Times, Life, the Washington Post and Newsweek. His various positions in television include Senior Executive Producer of "Anderson Cooper 360" and Executive VP of Original Programming at USA Network. He lives in Bucks County, PA.

Tom Shales won his Pultizer Prize for television criticism in the Washington Post. He is the author of On the Air!, Legends, and Live from New York, and has written for publications such as Esquire, Playboy, Life, and Interview, among others. He lives in McLean, Virgina.

Praise for THOSE GUYS HAVE ALL THE FUN:

"Those who work in the business of sport will devour the book...[readers are] granted the kind of behind-the-scenes access that sports media junkies are rarely given..."—Richard Deitsch, SportsIllustrated.com

"Those Guys Have All the Fun is a de rigueur read for sports fans who wonder how a fired hockey announcer used a $9,000 credit card advance to start a broadcasting empire that changed what we think about sports and how we view them."—Woody Paige, Denver Post

"Packed with entertaining stories of unpleasant people and awful behavior....[Those Guys Have All the Fun is] offers a nuanced look at ESPN, does some top-notch TV-biz reporting on the early days of the cable industry, and offers compelling behind-the-scenes stories...[It is] a serious, impressive, piece of work."—Rob Brunner, Entertainment Weekly

"A revelation: what goes onto the TV screen turns out to be just the glossy tip of an iceberg of ugly backstage drama. Miller and Shales must be extraordinarily talented interviewers, because their subjects are surprisingly uninhibited and frank and willing to dish and slag....[They are] good at zeroing in on a debacle and getting everybody involved to weigh in...by the end of the book you're amazed at the disconnect between the chaos behind the scenes and the relatively slick end product."
—Lev Grossman, Time

"As highly anticipated by sports junkies as a Chicago Cubs championship, [Those Guys Have All the Fun] provides painstaking details on how a nutty idea concocted by a father-son team developed into a brand worth more than the NHL, MLB and NBA combined...Shales and Miller manage to create a page-turning document about the ultimate dysfunctional workplace"—Neil Justin, Minneapolis Star Tribune

"...Perhaps the most anticipated book in sports media history."
—Newsday

"Those Guys Have All the Fun delivers a hell of a narrative...[and] an outstanding work of journalism. Easing interviewees into such comfort that they said what they did on record is an enormous achievement for Miller and Shales."—Daniel Roberts, Fortune

"This treat for sports fans has a cast of characters that is huge and varied."
—Janet Maslin, New York Times

"What a story: larger-than-life personalities, salacious gossip, backstabbing and corporate intrigue set against the backdrop of the rise of cable television as an economic and cultural force....The quotes flow seamlessly, and the voices are fresh and vibrant...The depth and breadth of the interviews make it not only the definitive account of ESPN's first three decades but one of the best books yet on how cable shaped American culture."
—Andy Lewis, Hollywood Reporter

"A rollicking glimpse behind the guys and gals who sport around at ESPN, America's sports church. Amen."
—Publishers Weekly