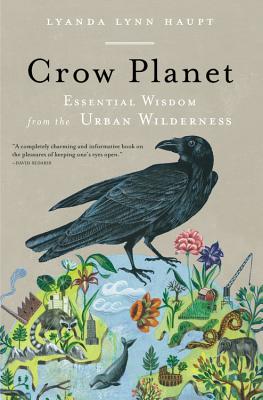 By Lyanda Lynn Haupt
$23.99
Unavailable at this time.

There are more crows now than ever. Their abundance is both an indicator of ecological imbalance and a generous opportunity to connect with the animal world. CROW PLANET reminds us that we do not need to head to faraway places to encounter "nature." Rather, even in the suburbs and cities where we live we are surrounded by wild life such as crows, and through observing them we can enhance our appreciation of the world's natural order. CROW PLANET richly weaves Haupt's own "crow stories" as well as scientific and scholarly research and the history and mythology of crows, culminating in a book that is sure to make readers see the world around them in a very different way.

Lyanda Lynn Haupt has created and directed educational programs for Seattle Audubon, worked in raptor rehabilitation in Vermont, and as a seabird researcher for the Fish and Wildlife Service in the remote tropical Pacific. She is the author of Pilgrim on the Great Bird Continent and Rare Encounters with Ordinary Birds (winner of the 2002 Washington State Book Award). Her writing has appeared in Image, Open Spaces, Wild Earth, Conservation Biology Journal, Birdwatcher's Digest, and the Prairie Naturalist. She lives in West Seattle with her husband and daughter.

"A completely charming and informative book on the pleasures of keeping one's eyes open."
-David Sedaris

"In a lyrical narrative that blends science and conscience, Haupt mourns the encroachments of urbanization, but cherishes the wildness that survives."
-New York Times

"A personal book, one that uses [Haupt] and her fondness for crows to cast its interests toward large concepts such as conservation, the environment, and learning to live more thoughtfully."-Seattle Times

"With her sensitivity, careful eye and gift for language, Haupt tells her tale beautifully...immersing us in a heady hybrid of science, history, how-to and memoir."-Los Angeles Times

"If you live in a city and want to expand your awareness of the natural world, CROW PLANET would be a compelling and inspirational book. If you love or hate or are mystified by crows, it is an essential one."-The Oregonian

"A delightful meditation on our role in the natural world...[Haupt] provides a rich context for exploring the relationship between humans and nature."-Library Journal, Starred review

"Haupt writes gracefully about the interactions between crows and humans in the urban landscape and what those interactions portend for the future of the zoöpolis. A fresh take on conscious living in the everyday world."

"Haupt enlivens her observations with tidbits from crow mythology and history [and] succeeds in humanizing the object of her naturalist obsession and affection."--Publishers Weekly

"If you picture Henry David Thoreau as a young mother and scientist in suburban Seattle, you can begin to imagine the literate elegance of Crow Planet. Lyanda Haupt has spun the natural life of neighborhoods, and most poignantly the surpassing intelligence of crows, into the kind of gold only the most gifted writer and naturalist could fashion. Crow Planet is a small treasure, a conversion experience of truth, wit, and re-enchantment that remakes the world and our place within it."--Paul Hawken, author of Blessed Unrest and Natural Capitalism

"Haupt captures crows wonderfully in elegant prose and weaves a thoughtful tale that connects them from St. Benedict's philosophy of lecti divina of 480 CE to our growing awareness of our kinship to, and dependence on, the rest of life."--Bernd Heinrich, author of Mind of the Raven

"Lyanda Haupt observes crows with a naturalist's eye and discovers that they are smart, social, and disturbingly like us...Your strolls around your neighborhood will be much more interesting after you read this book."--Denis Hayes, national coordinator for the first Earth Day and President and CEO of the Bullitt Foundation

"The fiction (sometimes the hope!) that you can escape from nature by living in the city is as sad as it is widespread. This book will remind you to open your eyes to the mundane--it will make the city a far richer place for you."--Bill McKibben, author of The Bill McKibben Reader

"Crow Planet gently confronts us with the desperate need for mindfulness as we go about our daily lives in the urban wilderness so that evolution may continue and we may stem the loss of our humanity."--Maggie Ross, author of The Fire of Your Life: A Solitude Shared

"Haupt creates an amalgam of ornithology, mythology, philosophy, and advice on how to engage with­--and some warnings about our effects on­--nature; the result is an engaging book-long essay on the interconnectedness of life."--Irene Pepperberg, Ph.D., author of Alex and Me