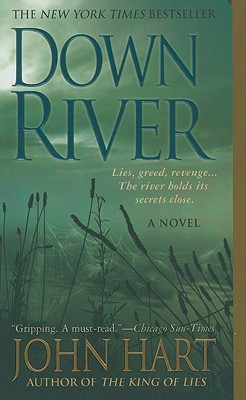 Possibly one of the oldest stories: a disgraced son returns home to the Southern town and family that branded him a murderer. But in John Hart's capable hands, "Down River" is a piercing family drama; and great suspense as well. P.S. Now Winner of the Edgar Award!

Adam Chase is passionate and misunderstood, a fighter. When narrowly acquitted of a murder charge, he disappears for five long years: not a clue, not a trace. Now, he's back and nobody knows why--not his family or the cops, not the women he left behind. But Adam has his reasons.

When more bodies surface, Adam must unravel a web of deceit and violence so dense it staggers the imagination. Old secrets rise, lives collapse, and more than one person crosses the brink as author Hart probes the timeless, destructive power of deception and vengeance."Down River" is the winner of the 2008 Edgar Award for Best Novel.

John Hart is the "New York Times" bestselling author of "The Last Child" and "The King of Lies." The only author in history to win the best novel Edgar Award for consecutive novels, he has also won the Barry Award and England's Steel Dagger Award for best thriller of the year. He was born and raised in North Carolina. For a time he practiced criminal defense law, but left to focus on his writing.

“Down River should settle once and for all the question of whether thrillers and mysteries can also be literature.”—Publishers Weekly (Starred Review)

“Riveting. Down River will sweep you away.”—Richmond Times-Dispatch