The Demon of Dakar: A Mystery (Ann Lindell Mysteries #3) (Paperback) 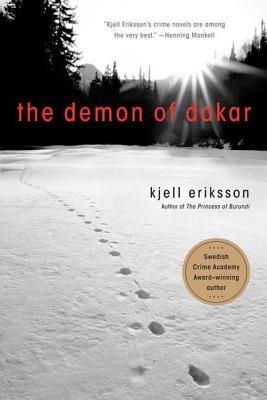 This is book number 3 in the Ann Lindell Mysteries series.

Already a huge star in Europe and the Nordic countries, Kjell Eriksson has American critics also raving, with almost every review studded with words like "stunning," "chilling," "suspenseful," "haunting," and "brilliant."

In The Demon of Dakar, Ann Lindell and her motley crew of colleagues are faced with a most baffling murder case in which all clues lead straight back to a popular local restaurant named Dakar. The owner, Slobodan Andersson, has some shady connections in his past, and his partner's reputation is equally murky.

The kitchen crew is not above suspicion, either. The meat chef is an oddball, to say the least, while unbeknownst to the rest, the newest hire's personal life is a tangled web of lies. Even Eva Willman, the seemingly blameless older woman returning to the workforce as a waitress, has skeletons in her closet.

And then the tension rachets up a number of notches as it becomes apparent that one murder has not satisfied the killer in the least. If Ann is to prevent a bloodbath at Restaurant Dakar, she must match wits with a killer whose motives are seemingly completely obscure.

But the reader knows the killer well. His crimes are justified from his point of view. Not only that, he's a very likable fellow who is only looking for justice. As in all of Kjell Eriksson's compelling spellbinders, though, justice entails a frantic race to the finish, a race without rules and fraught with danger.

Winner of the Swedish Academy Award for Best Crime Novel.

“With Kjell Eriksson, what we find is an extraordinary depth of feeling for honest people caught up in serious crime. [In The Demon of Dakar], Eriksson shows how crime undermines the foundations of both family and community.” —The New York Times Book Review

“Riveting...resembles the books of Maj Sjowall and Per Wahloo, not to mention those of the modern master Henning Mankell.” —The Wall Street Journal on The Princess of Burundi

“Moving...Eriksson understands the pathology of suffering humanity and explores it with the utmost tenderness.” —The New York Times Book Review on The Cruel Stars of the Night

“Eriksson is a major talent, and his feel for ensemble narrative will have McBain devotees enthralled.” —Booklist on The Cruel Stars of the Night

“Intriguing . . . complex . . . will appeal to fans of Fossum and Tursten. A must for the growing contingent of Swedish crime-fiction devotees.” —Booklist

“Riveting . . . it's hard to see how the author could do any better. Eriksson is a gifted storyteller and a great creator of character . . . terrific.” —The Globe and Mail

“An outstanding series . . . links between the murder at Dakar and other violent crimes heighten the urgency as more bloodshed looms. . . . Ably translated--has a big cast and a wide canvas, but Mr. Eriksson is careful to keep the story on a human scale.” —The Wall Street Journal