The Cruel Stars of the Night: A Mystery (Ann Lindell Mysteries #2) (Paperback) 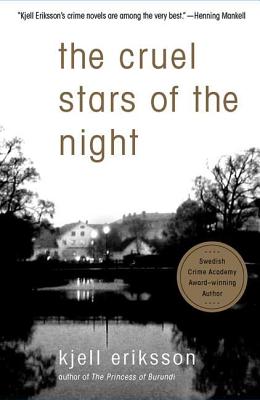 This is book number 2 in the Ann Lindell Mysteries series.

When The Princess of Burundi was published by Thomas Dunne Books, American critics hailed Kjell Eriksson as Sweden's Ed McBain, and they compared him to Henning Mankell. Now The Cruel Stars of the Night, the next in this internationally acclaimed crime series, unveils a spellbinding new tale again featuring police inspector Ann Lindell.

The Cruel Stars of the Night opens one snowy day when thirty-five-year-old Laura Hindersten goes to the police to report that her father, a local professor, is missing. Inspector Ann Lindell and her colleagues can find no motive for the man's disappearance. And when the corpses of two elderly men do turn up, neither of the dead men is the missing academic.

Unexpectedly, the police get help from one of the professor's colleagues, who believes there is an astonishing link between the murders and the disappearance of Professor Hindersten. But as the pressure on Lindell increases dramatically, she is shocked to discover that the killer has many more diabolical schemes in store.

Combining heart-pounding suspense with brilliant psychological insight, The Cruel Stars of the Night moves like a comet as it approaches the cliff-hanging climax. It is sure to win Kjell Eriksson a whole new galaxy of American fans.

“Compelling . . . the author's squad of detectives displays the kind of inter-dependency and fractious loyalty that endeared Ed McBain's 87th Precinct squad to fans for so many decades.” —Publishers Weekly

"A brilliant, haunting work of psychological obsession.” —The Globe and Mail on The Cruel Stars of the Night

“Eriksson is a major talent…will have McBain devotees enthralled.” —Booklist on The Cruel Stars of the Night

“There are echoes of Ed McBain . . . but Eriksson's second mystery is even more reminiscent of Ruth Rendell. As insightful and intelligent as it is engrossing.” —Library Journal